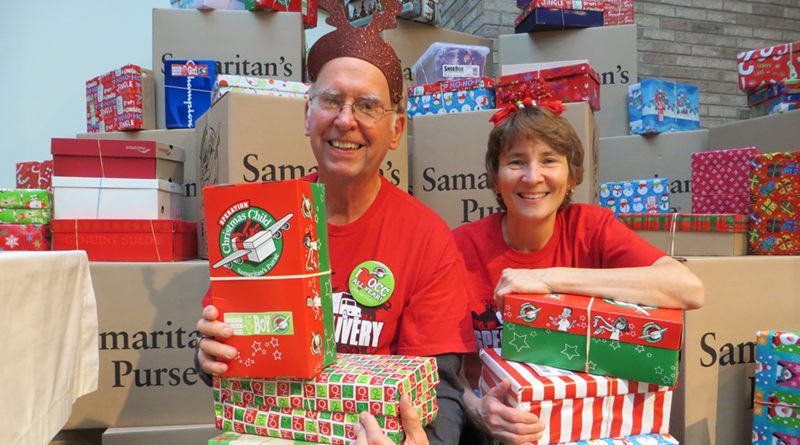 Even though Joel and Pat Slesak of Greece are retired, they’ve never enjoyed working more than they do now as volunteers for Operation Christmas Child, the largest Christmas project in the world.

People from all over the country fill shoeboxes with school supplies, hygiene items and toys for needy children around the world who are victims of war, living in poverty or recovering from natural disasters.

Since 1993, Samaritan’s Purse, a nondenominational evangelical Christian organization, has helped to meet the needs of less fortunate children. Over 167 million shoebox gifts have been delivered to over 150 countries since the project began.

As area coordinators for the Finger Lakes West Area (Monroe, Wayne, Livingston and Ontario counties), Joel, 72, and Pat, 68, have grown their team from 12 people in 2014 to 29 people today.

Their team of volunteers reaches out to individuals, families, schools, community groups and churches to pack shoeboxes. The number of boxes filled each year from residents in these counties has doubled — from 10,000 in 2014 to about 20,000 boxes in 2018.

They’ve been responsible for coordinating a huge packing party at Hope Church, which in recent years, resulted in more than 10% of the area’s total shoeboxes.

“We had been packing shoeboxes on our own for a few years already when Joel retired from Thrivent Financial as a community care specialist, and I retired from my job at Alpha and Omega Parable Bookstore,” Pat said. “We heard about the powerful impact these shoeboxes have on children and their families and wanted to get more involved. That’s when we found out about the opportunity to be part of Operation Christmas Child as year-round volunteers. We’ve been doing that ever since.”

The Slesaks heard about a young man who lived close to the equator who had received a shoebox when he was 12. The box had winter gloves in it. A useless gift, one might think, but the gloves allowed him to get a desperately needed job working in a kitchen with hot ovens. In some countries, children are not allowed to attend school because they lack basic supplies like paper and pencils.

Families simply cannot afford them. The school supplies packed in shoeboxes are enough for many to finally begin formal education.

In many cases, the shoeboxes are the very first gift the children have ever received. While that is hard to believe, the items in the boxes can also change their lives.

Through Samaritan’s Purse, the Slesaks have arranged for young adults who received shoeboxes as children to visit Rochester and share their stories. This includes Alex Nsengimana, who survived the Rwanda genocide and received a shoebox gift after he was placed in an overcrowded orphanage.

“For children who have endured such unthinkable tragedy or living conditions, the shoeboxes represent hope and joy and love,” Joel explained. “We hear over and over how amazed the children are that people in the U.S. would actually send them gifts. They especially love the notes people write to them.  Translators are available when the shoeboxes are distributed to share the messages with the children.”

Last year, the Slesaks were invited to travel to the country of Ukraine with Operation Christmas Child to help distribute shoebox gifts.

“To see these children in such difficult situations where they really need hope was a powerful experience for both of us,” Joel recalled. “It’s one thing to watch a video of a distribution, but to actually be there to witness the joy the boxes bring made us realize just how important this project really is. We are so blessed to be a part of it and so thankful for the participation of folks right here in our community that allows shoeboxes to get to these children.”

“We know that more people would love to be a part of this but just aren’t sure how to go about it,” added Pat. “It’s easy and a lot of fun.”

To pack a shoebox:

• Use a regular size shoebox, cardboard or plastic

• Choose a quality “wow” item such as a doll, soccer ball or stuffed animal

• Include $9 to help cover shipping the box overseas

• Drop off your filled shoebox at one of many collection centers in the area during National Collection Week, Nov. 18-25.

If you’d like to learn more about packing shoeboxes or getting involved with this project, contact occshoeboxjoy@gmail.com.