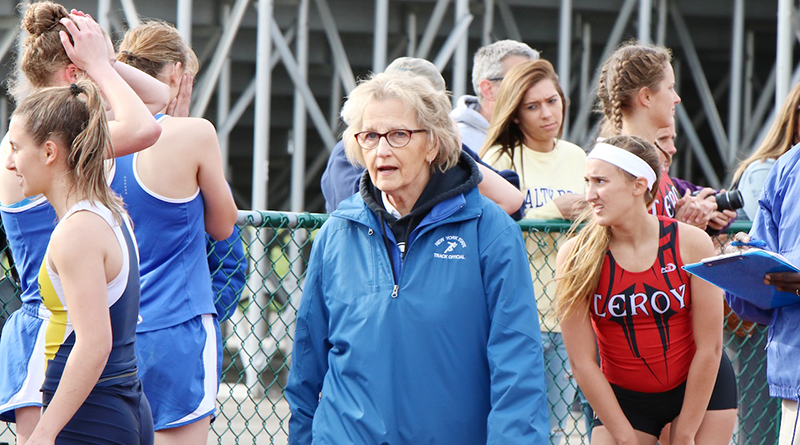 Williamson resident reaches national prominence in track and field — has officiated all over the country, including at Olympic trials in Oregon for three Olympiads

It was one of those Saturdays this May that didn’t feel like spring at all. Rainy. Cool. Breezy.

Kathy McLymond had things organized early. She was positioned under a fold-up canopy that was tied down because of the wind, processing things calmly and precisely. She looked very comfortable, but she had several layers of clothes on, a practiced skill for someone who spends so much time outdoors.

This little patch was a peaceful province, but she had her eye on things as an event referee. The finish line was just 40 feet away, athletes milled about on the other side of the track from her. The trainer’s tent was nearby, but apart.

Out there, on the other side of the railing that rimmed this track in Marion, Wayne County, was her realm — with a couple dozen officials and athletes from more than 20 teams, competing in their league championship. Problems would come to her for solution. Results and information would flow from her.

Weeks before, she was positioned at the starting line at another event, but this time was very active in getting kids lined up and organized at the line. She’s positive and purposeful and extremely nice, but few see her smile, because she’s focused on keeping the chaos of a track and field meet organized, and on time.

McLymond, from Williamson, is a nationally recognized track official. Close to home, she works high school and college track and cross-country meets. Out of the area, she has been just about everywhere, and is a prime official for the Mid-America Conference Championships. She has officiated at Olympic trials in Oregon for three Olympiads (2008, 2012, 2016), the only official from the Rochester area to do so.

At the USA Track & Field National Convention in Ohio this winter, she was presented the Horace Crow Award as the “Outstanding Field Event Official” in the country among the 4,500 other nationally certified USATF officials. The top honor was inevitable — she was a finalist in the last four years.

McLymond, 68, is a grandmother, a business owner with her husband, a Webster high grad, and a 50-year homeowner along Lake Ontario.

When she’s not traveling out of state, McLymond is the Wayne Finger Lakes Track & Field Officials executive director and assignor. Go to any local track meet in Wayne County and its surroundings and McLymond has scheduled the officials who guide the event.

Her interest in track started by watching husband-to-be, Lynn, captain of the track team and a 100-yards-in-10-seconds-flat sprinter at Webster. High school sweethearts, they were married three years after graduation — 50 years ago this August. Two years later, son Troy was born, followed three years later by Andy.

McLymond got interested in officiating in Andy’s last year on the Williamson track team and in 1991, asked some officials what it took to join them.

“They had meetings starting in February, on how to go through each event,” she said. She went to the meetings, took the test, and was okayed to join the W-FL officials. That got her started at the high school track and cross-country level.

She did her first college meet in 1996, at the University at Buffalo, which was hosting an NCAA Division I national meet, in June. “It was very cold,” she remembers. ‘That was a big surprise.” To get the experience she needed to go to the higher rungs of officiating, she made a lot of trips to Buffalo.

Not long after that she was officiating in NCAA Division I, II and III meets and championships. She is one of the four referees (the official in charge) in the Mid-American Conference for track and field championships. With the USATF, she officiated at the Outdoor Junior Championships for rising Olympians-to-be, and was in Eugene, Ore., for the Olympic trials.

The USATF meets include professionals. She was the flight coordinator (official who calls people up for their attempts) in high jump when Chante Lowe broke the American record.

She officiated at the International Associations of Athletics Federation’s (IAAF) Indoor World Championships with competitors from 144 countries and was the pole vault flight coordinator when Jenn Suhr from Rochester won, and then on the high jump crew as Vasthi Cunningham won the high jump.

McLymond had a personal brush with Justin Gatlin, the only American sprinter to beat Usain Bolt in the 100 meters and the current world record holder.

“He and I were at the Olympic trials in Eugene,” she explained. “Coming home, we got on the same plane in Eugene. He’s in first class, wearing a baseball cap. I’m in regular class. I walked past him to get to my seat and he said, ‘Thank you for officiating.’

“When I got off the plane in San Francisco, I said to him, ‘Gee, thanks a lot for thanking me.’ He is a very humble man. He told me, ‘If it weren’t for you officials, we couldn’t do what we do.’”

“’I won,’ he told me. Then I realized who he was. He was such a humble person, he didn’t want to tell me how he did.”

This June, the USATF Niagara Association hosted a National Youth Meet for 3,000 athletes from 8 to 18: McLymond, as the certification chairwoman, processed 100 applications from officials across the country and coordinated housing, meals and meet assignments for all.

She is busy five days a week, year-round.

What does she most enjoy?

“Oh, the friendships I’ve made. It’s downright boring sitting around home [even though that home has a spectacular lakefront view]. About an hour of that is enough. I just want to stay active and be with people and socialize. I have terrific friends across the whole country I’ve met traveling around the US, working at track meets — they’re just terrific friends.”

People say when you work with kids, you feel younger yourself.

“It’s fun to see what these athletes accomplish,” she said, “the enjoyment you see when they break their best time or went higher. Special Olympics are really, really special, and the disabled games at Brockport in the fall – that’s really fun to see those athletes enjoying what they do.”

She has seen many of the top athletes in the country in their prime, pushing to do their best in tight competition. Universally, she believes one thing about them: ‘They’re all nice people. All the track athletes are really nice.”

McLymond stresses that more track and field officials are needed to keep the sports vibrant, and she shared a surprise. Collegiate football and basketball officials are paid well. Most track officials get nothing unless they are senior referees coordinating a large event, then they get a small stipend and perhaps a room in a hotel as opposed to a dorm room at the college hosting the event.

“You’ll never get rich doing this,” she said. “For the USATF, they are just starting to pay at national meets, but not much. Unless you’re the head official or referee at an event, you have to pay your own way to get there. That limits how many events you do.

When you look around, even at the local high school meets, you see the truth in what McLymond says. But the folks who are there obviously enjoy what they’re doing — and without them, those athletes couldn’t do what they love to do.

How many more meets does she have left in her?

“I’ll do this until I can’t anymore,” she said. “This keeps your mind active and your body physically going.”

Watching her work with kids on the track, you see someone who is unassuming and forthright, pleasant but direct, professional and unflappable, and so nice it’s hard to disagree with her. No wonder she thinks all track athletes are nice people.