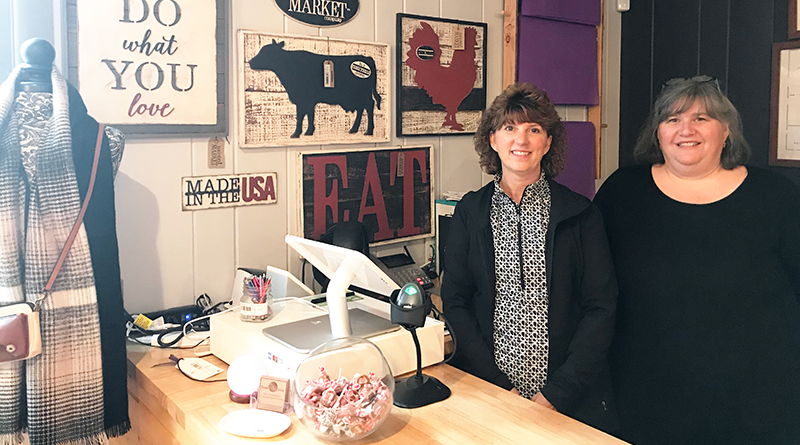 Eileen Maher and Tracy McGrody have shared a lot together over the years.

The two grew up in Fairport as the daughters of two best friends. Eventually, they became best friends, too.

Maher became a chemist; McGrody, a nurse. They married and raised families in Fairport. Along the way, they often discussed going into business together.

But their kids were little and the time was not yet right. After a Fairport store they frequented — Possibilities — closed, they took it as a sign that they should take a step toward their dream and go into business together.

Both at 55, at an age when some might be reluctant to try a new career path, the two jumped in together.

“Luckily, our husbands were encouraging and said, ‘Do it now or you’re never going to do it,’” Maher said.

The next day, they drove around, looking for just the right place to open a store. They stumbled upon an old building on Whitney Road in Fairport.

“It was in shambles but we thought, ‘It’s a good project and we think we can make something of it,’” Maher said.

That was October 2016. They finally closed in March 2017 and proceeded to paint, scrub, tear down walls, and whatever else needed doing to transform the space. The building, dating to 1957, had been used for several purposes: a plumbing store showroom, as well as camping, convenience and aquarium stores.

After a heavy facelift inside and out, Purple Moon Cottage was born. The duo recently celebrated their first anniversary as business owners.

“We just fly by the seat of our pants,” McGrody said. “We’re learning as we go.”

The biggest challenge, they said, is getting word out about Purple Moon Cottage. The store owners pride themselves on carrying unique items, such as dishes, candles, signs, and other decor. There is also a section with handbags, jewelry, socks, scarves, and other accessories as well as greeting cards.

They also offer consigned furniture including Ethan Allen and Stickley pieces. They try to carry products made in the United States, including pieces from local artists.

“We specifically go out of our way to find things that the other gift stores are not carrying,” Maher said.

“It’s a lot of fun to add to inventory and buy pretty things,” McGrody said.

Maher agreed, relaying how, on their first buying trip, they spent the first three days touring floor-after-floor of items in Atlanta with their jaws dropped.

“We finally started buying stuff and we picked out the stuff that we love,” she said. “It’s like Christmas every day. And we only carry things in the store that we love because we told our accountant that life’s too short to look at ugly things.”

They have many repeat customers who adore specific items or lines. When new inventory comes in, they call them. The biggest reward is helping customers find just the right item, whether it be for themselves or for a gift.

“Everyone that comes in says, ‘Oh! How cute!’ And ‘It smells nice in here,’” Maher said.

“It has to smell nice and we have to have candy. Those are the two things,” McGrody added with a chuckle.

Going into business with a close friend could scare some, but McGrody said there’s no one else with whom she’d rather go on this journey.

“It’s a lot of compromise,” she said. “It’s like a marriage. It’s all about compromise, because we do have different ideas.”

Still, maintaining their friendship is the most important thing to both of them. Their daughters, who have put in some hours at Purple Moon Cottage, have become friends, too.

Maher and McGrody said they have been welcomed by fellow business owners in Fairport and have found it rewarding to serve the community they grew up in and still call home. They would encourage anyone else debating whether to pursue a dream to “just do it,” McGrody said.

“I really wish we would have done it way before this, but we both had young families and careers, and we both said someday,” she said. “And someday finally came.”

As for the name? They knew they wanted the word “cottage” in it because of the warmth it evokes. Originally, they were thinking of something like “Harvest Moon Cottage” but could not find an available domain name. Both women like the color purple, so Purple Moon Cottage was born.