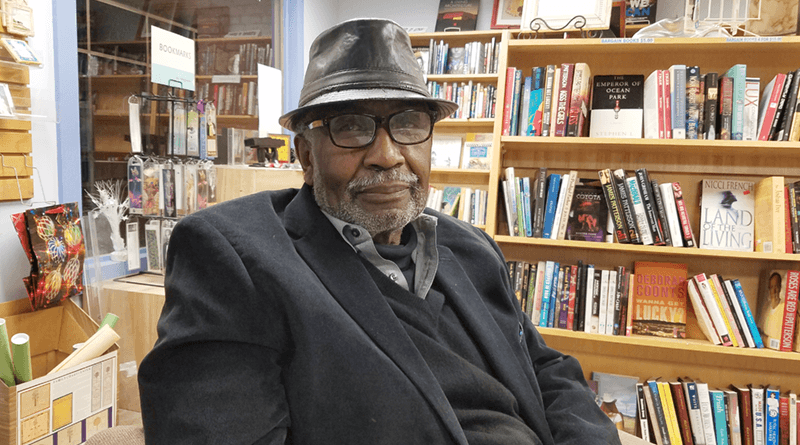 ‘The professor’ is still running his bookstore — Mood Makers Books in Rochester — while nurturing the careers of playwriters, actors, directors

They called Curtis Rivers “the professor” even though he was just a young recruit in the Air Force. But he loved to read, to write and talk all about books. His buddies smiled at his full bookshelf and ribbed the professor for being so, well, bookish.

“I always had a bookshelf, and it was always full of books. The guys gave me the name ‘the professor’ because none of them had books in their room.”

Rivers, 78, is no longer in the Air Force, but he is still surrounded by books at his bookstore, Mood Makers Books in Rochester.

Rivers is a Nashville native who, like so many others, came to Rochester in the ‘60s to work for Kodak. He and his wife, Marie, just celebrated their 49th wedding anniversary and have three grown children and three grandchildren.

In March of 1994 Rivers and his wife opened Mood Makers Books, on the third floor of Village Gate. At first the store only displayed and sold art by Curtis’s brother, Thurman Rivers. Patrons enjoyed the art but wanted more and requested gifts, cards and books. Soon Curtis and Marie had to expand their space and inventory. Mood Makers Books is still housed in Village Gate but currently occupies a large first floor space.

Mood Makers offers a large array of books by and for the African-American community, including several books by local authors. They have a beautifully stocked children’s section, women’s studies section and spirituality and religion sections, among others. They still sell gift items including figurines, stationary and calendars.

Community involvement is a high priority for Rivers and he makes sure that everyone who enters feels at ease and at home. Cozy couches beckon customers to “sit, stay awhile.” And people do.

“When I was working at Kodak, I always wanted to open a bookstore. But I didn’t want it to just be another bookstore. I wanted it to integrate into the African American community as a place where you could come and actually feel at home. Most people that come in here they feel at home and they sit on the couch. Sometimes we get a bunch of folks in here and they argue and talk about all kinds of stuff. It’s like a home. They come in here and say, ‘this is the coolest place I’ve ever been in.’”

In addition to maintaining Mood Makers and cultivating community at the store, he is also a leader in the Rochester theater community. “I was always — even in the Air Force — part of community theater,” he added.

In 2006 Rivers and his theater company, MMB Theater 1 Project, founded the Sankofa Evening of Theater and Jazz, a festival celebrating the African-American theater arts in Rochester at the Multi-use Community Cultural Center (MuCCC) on Atlantic Avenue.

Starting Aug. 18 and running through Sept. 1, Sankofa will feature full-length plays, one act plays, and a “Night of Tens” showcasing 10-minute plays.

The Sankofa festival has become a much-anticipated event for writers, actors, and theater-goers all over the area, including Jose DaCosta of Chili.

Several years ago, Rivers encouraged DaCosta to audition for one of his plays and has enjoyed being a part of the festival ever since. He pointed out that Rivers is extremely supportive of everyone involved in Sankofa:

“If you’re a playwright he offers you the opportunity to present and display your words and hopefully get selected into the festival,” said DaCosta. “He gives people who may not be playwrights, but who have an interest in directing, an opportunity to direct other people’s plays. And if you’re a fledgling actor or actress like myself he gives you an opportunity to perform and to share your skills if they are selected by the director.”

Karen Cully, of Irondequoit, met Rivers through her work with the Bronze Collective Theater Fest in 2016. Last year her play, “The Green Book Chronicles” was the lead play for Sankofa.

In addition to mentoring and supporting local playwrights, directors and actors, Rivers provides them free rehearsal area in an upstairs space at Village Gate. He also hosts staged readings at the bookstores.

“He gives playwrights a platform and a way to produce which we didn’t have before the Bronze [Collective Theater] and before Sankofa,” said Cully.

Rivers began writing his memoirs based on his journals from the last 50 years. But as he was working on them, he realized that “I’m not a novelist, I’m a playwright!”

He adapted what he had worked on into a set of 10 different plays called “Backyard Stories from 1018 15th Ave South.”

Fifteenth Avenue was the street he grew up on as a young person in Nashville. He was in the process of producing two of the plays in the “Backyard Stories” series for a show at the end of June.

It’s clear that Rivers has made a big impact on the Rochester theater and literary community by providing a platform for many people looking to make their big break.

“One thing I didn’t emphasize enough is Curtis’ focus on inclusion and diversity of the people he engages in the Sankofa Festival,” said DaCosta. “He has been particularly encouraging to black and Hispanic females at all levels of participation — playwrights,directors and actors. He has effectively grown the base of artistic contributors to the festival while steadily growing his audience. I’m impressed with not only his foresight for the Sankofa Festival but his support of other playwrights and other theater groups in terms of presenting an opportunity for people who want to participate in the local theater scene. I just give him kudos for keeping Mood Makers Books going at the same time. I give him a lot of props!”