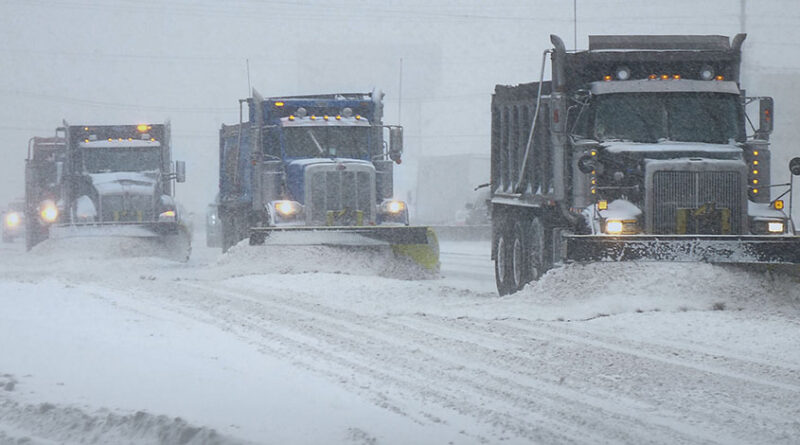 Wait until you can’t see that bulldog on the hood

Go out in the middle of a big Upstate New York snowstorm and the first thing that hits you, after the ice crystals in your eyes and the snowflakes in your nose and ears, is how quiet it is. How incredibly still things are.

And you strain to hear something, because hearing nothing is so unusual.

Then you sense it.

Down the road, you see the storm is brighter, with flashing yellow lighting.

And you hear it, a jangling rumble, a scraping push, an enormous engine roaring. In a moment, the truck comes out of the snowy fog, blowing and throwing a wave, a cloud of snow.

And it’s gone. You can watch in the quiet as the yellow flashing lights disappear in the whiteness.

Inside the cabin of that snowplow, which carries 11 tons of salt and antiskid, laying down the iron of an 11-foot front plow and an equally long wing plow, is a guy who is being awfully careful, and awfully warm.

Every moment that truck is in motion, he’s thinking about you, about us. He’s being careful for your safety and his. Without thinking very much about it, we trust him to keep all of us safe.

He’s got on a heavy sweatshirt, maybe a safety jacket. The heater of his rig is pumping out dry warmth, some of that coursing over the windshield, which is itself separately heated, with heavy-duty wipers on the outside.

All around him are lights and switches and levers. He’s got radio traffic to listen to, phone links and a computer connection. He has mirrors to help him know where the plow wing is hanging out to his right and all manner of lights to see where he’s going and warn traffic of his presence.

He’s going 25 mph, tops. And he wishes the cars behind him will be patient and not attempt anything as stupid as passing him.

“Traffic is terrible,” said Greg Phillips, a snowplow driver for the town of Phelps in Ontario County. “You’re going down the road at 25 mph and salting; you’ve got four or five cars behind you, and what do they do? They go by you. Now you’ve got to contend with that. They pull out, pass you, and they go up the road. And I think to myself, ‘What am I doing? I’m plowing the road, so what’s ahead of me? A snowy road.’ So now they pull in front of me and a mile down the road they’re in a ditch and want me to pull them out.

They were in a hurry.

“All of our plow drivers have had those conversations,” he said.

Phillips, 61, is a 20-year veteran of snowplowing. His mentor, Clarence Guard, taught him the ropes. “He showed me what to do, the pros and cons,” said Phillips. “He said the biggest thing is just watch the traffic because people want to pass you, which they’re not supposed to do. The advice I got when starting was, ‘Keep it between the telephone poles and the mailboxes.’”

Steve Stewart, 58, a foreman in the town of Ontario highway department, agreed with Phillips that the big issue for plow drivers is traffic, but in another sense.

“Once you put that iron on the ground, that’s when you really have to pay attention,” Stewart said. “The biggest thing is safety. You’re going down the road with a fully loaded truck. I’d hate to have something happen where someone gets hurt. The biggest thing is traffic, where they’re driving too fast for the conditions and a lot of times when we’re trying to plow the road open, they get so mad because we’re hanging over the center a little bit.

“What happens is that cars, in a heavy snow, they’re trying to drive in the middle of the road to stay away from the edge because they don’t know where it’s at. So, you’re coming close to other vehicles.

“I like plowing early in the morning and late at night, there’s no traffic. Daytime is the hard part. You have school buses and workers heading home. It’s tough then.”

Phillips came to snowplowing after being raised in farming and using all kinds of machines. He sold his last dairy cows in 1991 and then went to work for Phelps Sungas for 10 years, then to the town of Phelps.

“They were looking for a mowing guy to do roadsides,” he said, and that was his entry into town employ. That experience proved invaluable when he was tasked to start snowplowing because he knew the roadsides so well.

Stewart came to 18 years of town work after working as a printing press operator at Tucker Printers for 20 years. He started as a part-timer and the town helped him get his CDL license, which is needed for a full-time job. Before he passed the CDL tests, he plowed parking lots in a pickup truck.

“In the beginning, learning the plow itself was pretty hairy,” he said. “Back in the early days they used to run two guys to a truck. One guy was the driver main operator and the other guy controlled the wing. Those days faded away when I got here. When you were in the truck you were running the wing, the plow, all that stuff.

“When I first started to train, the foreman, Bob Fenn, took me out as a wing man. Once we got halfway through the route, he was letting me do the controls on the wing and then one time I pulled the lever — the wrong lever — and we took out a mailbox. I wasn’t allowed to touch the controls after that.”

He got his CDL and stepped into his own truck after a year.

“I like plowing,” he said. “Being a plow guy is like being your own boss. You’re in your own truck; you and your boss know what the job is, and what you have to get done. It gives you a bit of freedom.”

Phillips has worked with trainees.

“We’ve got a young guy. A new trainee and his first time in the truck he said, ‘This thing is BIG!’” he said.
And expensive: a snow plow, fully equipped, is a $300,000-plus investment.

Phelps uses a system where one of its eight drivers takes two weeks of night shift work, ready to hit the roads from 10 p.m. to 6 a.m., “to watch the roads, in case it’s snowing and blowing, for ambulance and fire calls,” Phillips said. “If it gets bad, you can call guys in at any time. Usually if it gets bad, we call them in at 3:30 a.m.”

Then he added, for the night shift, “at 6 a.m., you’ve had enough plowing if you’ve been out all night.”

Both men noted the change in work schedules for the towns they serve. When each started, second-shift workers were getting home between 11 p.m. and midnight, and the plows had to be ready to make the roads safe for them.

Keeping alert anytime during a snowstorm is paramount. Both men pointed out the dangers of traffic, but Phillips noted that people use the quiet snowy nights to take their dogs for a walk, and that’s something that can jolt a snowplow driver.

Visibility is such a concern with lake-effect snows. A trainee once told Phillips it was difficult to see the road in the driving snow.

Water is important in the cabin to keep drivers hydrated. Phillips likes his cold. He rigged up a plastic cup tied down to his outside mirror. He puts his plastic water bottle in that cup.

“The water will freeze in two seconds when it’s zero degrees outside and you’re going down the road. Then I set the water back inside and it’s nice and cold,” he said.

Stewart said Ontario is trying to find solutions for better visibility during storms.

“We’ll try turning off the headlights, the white lights, because they just reflect back from all the snow. It acts like a fog,” he said. “We’ll leave just our amber lights on and a lot of times that will help you see.”

Ontario drivers are also experimenting with yellow PIAA rally lights and high-overhead lights that sit on top of the cab, “so we’ll be under the lights, not trying to see through the beams,” he added.

But when all else fails and visibility isn’t much farther than the bulldog on the hood, the drivers stop.

“I couldn’t see the road one time. I was following someone’s tracks and ended up in a cemetery. If you can’t see, you just have to stop. What’s the sense?” Stewart asked. “You’re endangering yourself and anyone else.”

So, drivers seek a farmer’s turnaround or a big driveway and park the truck and wait for the snow band to pass, usually 20 minutes or so.

Before winter begins, town crews put out delineator markers and signposts with reflectors on them to guide a truck in heavy snow conditions. Superintendents scout roads to check conditions and cameras attached to new LED lights offer a glimpse of storm activity. Many trucks have GPS units in them and two-way radios help predict when a lake-effect band will hit as town-to-town highway communications voice the storm’s progress.

No matter what’s going on, the drivers saddle up.

“We fight the snow as it comes,” Stewart said.

“We all look out for each other,” added Phillips. “We have a good bunch of guys working. We all get along. We help out each other’s towns. It’s a family and that makes it easier.”