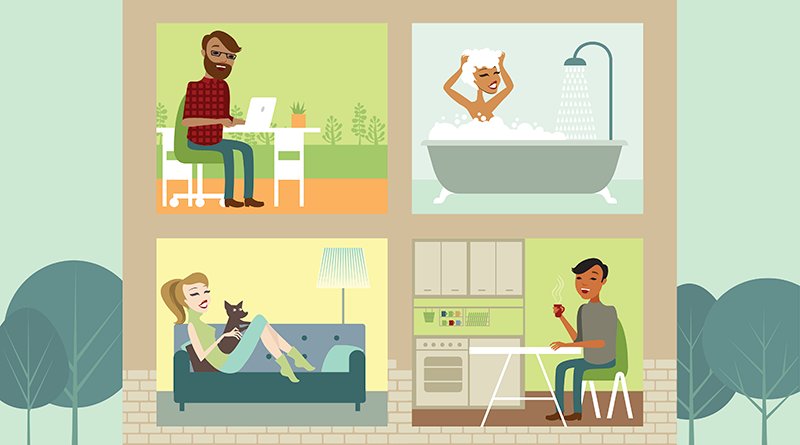 Having someone to share a home with has some great advantages, some disadvantages

Perhaps your large home feels even larger now that the children are grown.

Or maybe you would like a means to earn passive income to enhance your retirement.

Could your widowed mom enjoy some companionship? Or maybe you would feel more at peace if your in-laws weren’t by themselves so far from your home.

Any of these scenarios could be a good reason to consider renting a room to a housemate.

Whether through word-of-mouth or roommate matching websites, renting a room to a stranger when you’re a 55-plusser isn’t so strange anymore. Numerous people watched their retirement savings evaporate during the recession. Most older adults want to age in place. Renting a room provides companionship, savings on household expenses and assistance with chores.

Others rent space to save on their household expenses or to make commuting to a distant job easier.

For Paul Smith, a 55-year-old Rochester man who manages residential properties, renting two rooms in his three-bedroom home makes perfect sense. His children have grown, and for the past 10 years, Smith has rented his extra two rooms to roommates. They share most of the house and have their bedrooms to themselves.

“You can feel good about helping someone else out so they’re not paying full price for an apartment or a house,” Smith said.

“They’d eat up all my food and never pay a cent,” he quipped about his children. “Now that they’ve moved out, people live here who pay and don’t eat my food.”

Most of his roommates last about six months to a year. One he’s had for three years. Some hardly hang around the house; others seem more homebodies and spend more time at Smith’s house.

Smith is so enthusiastic about the merits of home sharing that he said that he “forced” his mother to acquire a roommate for her own safety. He solicited roommates and narrowed down the list through interviewing them and checking their backgrounds. His mother selected from a group of three and felt pleased with the arrangement once her first roommate moved in.

“She loved having a roommate,” Smith said. “They ate together, hung out together and would go out shopping together. She started eating right because at least one of them would be cooking.”

Smith encourages other older relatives and friends to rent out a room. Instead of paying someone to serve as a companion, a roommate brings revenue into the household and can help keep an eye on the elderly homeowner. Of course, if the roommate provides housekeeping beyond helping in the common areas or rides and other help, the homeowner can reduce the rate to compensate.

He believes that his mother’s roommates — she’s had three total — helped increase his mother’s lifespan and enjoyment of life during her final years.

“Mom had someone to talk with,” Smith said. “She felt more secure having someone in the house. It gave her great peace of mind and companionship.”

Smith said that selecting his roommates is similar to selecting a spouse, as far as checking for compatibility. He requires potential roommates to provide at least three references from previous landlords or roommates. He asks about issues they have. He scopes them out on Facebook, a tactic which he finds “very revealing.”

Smith wants roommates who work and can prove their income. They should clean up after themselves and leave common areas cleaner than when they found them. Pitching in with vacuuming and dusting is also helpful

“I insist upon a written lease,” Smith said. “Do not let anyone stay at your house without a lease.”

He said that he provides his own lease agreement, such as one downloaded from www.landlord.com and doesn’t use lease agreements that roommates provide, since they are often one-sided.

Despite a few unpleasant experiences, Smith said that it’s “a ball” to share his home. “I enjoy it. I’ll have more roommates. If I had a bigger house, I’d fill it up with more people.”

People renting part of their home with someone else must count that money as taxable income.

Shirley Malone, tax preparer and co-owner of Quincy Tax Service in Rochester, said that since it’s not earned income, homeowners won’t need to report it for quarterly taxes, but will have to report it April.

“You can also factor in part of the expenses of the home for that person,” Malone said. “Sometimes, the expenses end up being more than the income, which is kind of a subjective thing.”

For an elderly person who simply needs a companion, offsetting the income by hiring workers to perform home repairs and upgrades may prove a means to maintain the home and keep a companion.