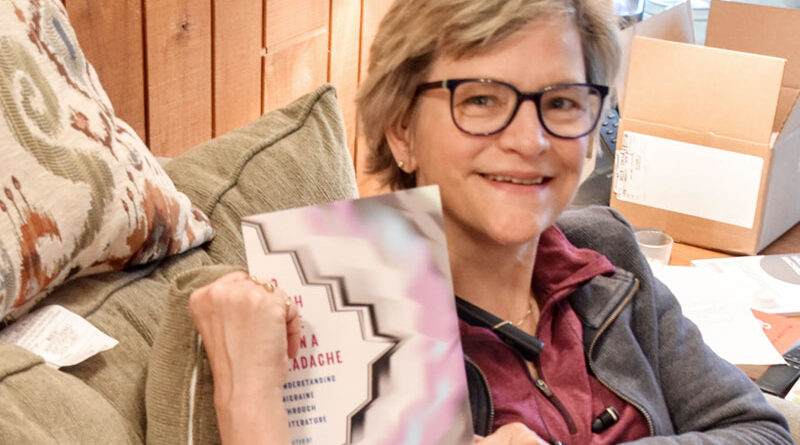 Kathy O’Shea has lived with migraine for more than 40 years. She wrote a book about it

Kathy O’Shea had her first migraine when she was just 14 years old. More than 40 years later migraines are still a part of her life.

“I’ve still not come to determine whether it lives inside me or it lives alongside me,” she said of the disease. “But it’s a life force, I think and like an entity in and of itself. It’s certainly a major part of who I am.”

O’Shea, 57, of Irondequoit, recently published her first book, “So Much More Than a Headache: Understanding Migraine through Literature” (Kent State University Press 2020).

It’s a collection of essays, poetry and short fiction about migraines. The idea for the anthology first came to her a little more than three years ago when she was dealing with an intractable migraine.

An intractable migraine is a period of migraine pain that lasts more than several days and does not respond well to medication. This particular migraine lasted for almost three months.

“I thought, ‘I have got to do something positive with all this,’ because I was depressed. I was extremely stressed and anxious. I wasn’t enjoying my work. I thought, ‘I’ve got to take this experience and do something good with it.’”

O’Shea, an English and philosophy professor at Monroe Community College for more than 30 years, decided to “take my love of literature and my experience with literature and combine it with the life force that has been with me for 40 some years.”

Thus, began her deep dive into the literature of headache and migraine.

She was astounded by the sheer number of writers who have written about their experience. Emily Dickinson, Virginia Woolf, Jane Austen and countless other creatives through the ages have dealt with the debilitating pain that accompanies a life with migraine.

She weaves each selection together with her own short essays to create a deeply-moving narrative about every aspect of migraine from the pre-migraine aura, the almost indescribable pain itself, the societal misconceptions of the disease, the daily management of doctors and appointments and medications and the strange and sometimes euphoric postdrome or migraine “hangover.”

Writer Anna Leahy is the director of the Master of Fine Arts degree program in creative writing at Chapman University in California. Her essay, “Half-Skull Days,” concludes the volume. Leahy describes O’Shea’s skillful organization of the collection as an “orchestration.”

“When she contacted me, it was because she had already been reading for the anthology. And so, I got the sense that she knew exactly why she wanted my essay in the book, where she wanted it in the book, and what purpose it would serve, which indicates that she knew how the book was shaping up and how the book was moving from one piece to another. And so, I think she really had a vision for – I don’t want to say story because it’s not narrative exactly – but a vision for how this was going to be orchestrated. And maybe orchestra is a good analogy, because these are really movements for migraine. It does work more like an orchestra, with many different instruments and different pieces. I’m not an expert in music but it seems to me that that’s a good analogy for how she looked at the book as an orchestration, rather than editing per se,” she said.

The result is a symphony of creative writing that helps readers understand the complexity of life with migraines. Some of that complexity stems from the misconception that “it’s just a headache,” which can lead to many sufferers feeling a sense of invisibility or erasure.

“What Kathy tried to emphasize is that migraine many times is an invisible disease,” said neurologist Joseph Mann. “The migraine brain is different than the brain of other people. There’s increased sensitivity to light, sound, odors, changes in the environment, changes for women with hormonal changes. For men there are hormonal changes as well as being more involved with stress and other issues.”

Mann started his career as a general neurologist in the 1970s. But in the 1990s he became a headache specialist.

“Migraine runs in my family. My mother and her sisters and cousins and grandparents and even my two daughters now have migraines. So, it was a natural fit for me,” he said.

He is retired now but works one day a week with Rochester Clinical Research. He met O’Shea when she became his patient many years ago. “So Much More Than a Headache is dedicated” to Mann.

Many people are completely unaware of the neurological differences Mann mentioned and cannot comprehend the level of pain many experience sometimes while carrying on with daily tasks. This pervasive misunderstanding has led to a widespread stigma associated with migraines.

“Many people don’t believe that you have migraines. They doubt it, you develop the stigma,” said Dr. Mann. “Same thing with even a spouse after a while. You start complaining because it sounds like you’re a hypochondriac. But for many people, migraine becomes a very chronic disorder and becomes very burdensome and very worrisome.”

Sometimes this stigma can embed itself among the medical professionals. O’Shea asked her current neurologist why it was difficult to find headache specialists in Rochester. “She told me that it was because of the stigma attached to migraine. And because it’s considered a ‘woman’s illness.’”

When asked who the audience was for the book, O’Shea said, “It’s your family. It’s your friends. It’s your coworkers. It’s the general public.”

She went on to say that this book isn’t any sort of self-help book. Indeed, there is no secret recipe or special advice in the collection. For migraineurs it’s about finding support through connection.

“My hope is that this collection offers migraineurs some solace in knowing they are not alone, some comfort when they feel weak and helpless in their pain, some assurance that so many others have traveled their path or one close to it, and, ultimately, some recognition of the moments of appreciation they feel when experiencing ‘time off’ from the disease.” (page xix)

For others, it is about cultivating empathy.

Dr. Mann wholeheartedly agreed. “If people read this book and see through literature what the complaints are, what it is, what it feels like, how it affects people, they will have more empathy,” he said.

Leahy believes that books like O’Shea’s help readers connect on a deeper level to humanity.

“It’s about human experience, a shared human experience. And it allows us to connect with each other and understand what it means to be human, even when it’s painful,” Leahy said.

To learn more about O’Shea, visit her website at migrainelit.com where she also maintains a blog about migraines.

So Much More Than a Headache is out now and available through local and national booksellers.

Photo: Kathy O’Shea holding her book, “So Much More Than a Headache: Understanding Migraine through Literature.”