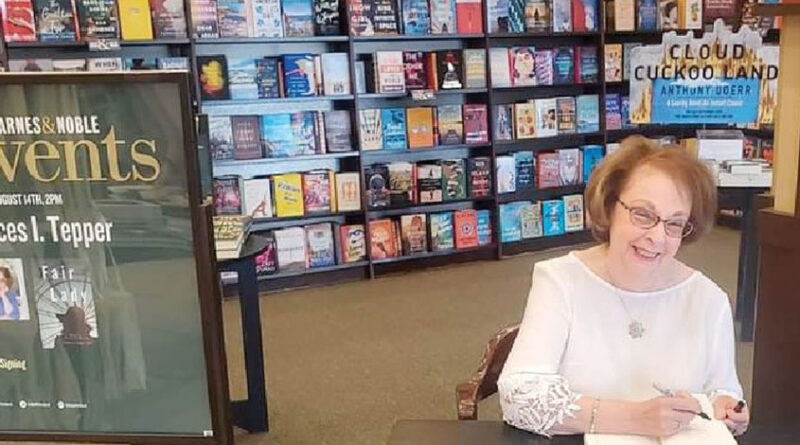 Fran Tepper, at the heart of the Monroe County Fair for 20 years, pens a book about her tenure

Fran Tepper is the kind of woman you’d want your daughter to talk to.

They’d exchange words about girl things for a minute, and then Tepper, a grandmother, would ask your daughter, “What do you want to be?”

Your daughter would bubble out a standard answer, something she’s told others; a practiced answer.

But Tepper would wink and smile and ask again, “What do you really want to be?”

And the discussion would ensue with Tepper saying, “That’s a wonderful thing to be! You go do that! Don’t let anyone tell you that you can’t do it.”

Tepper has met and worked through challenges since she was a child. Her mom died when Frances was 9. Her dad, a lifelong pack-a-day smoker, died when she was 16. She lived with an aunt and uncle to finish her senior year in Eastridge High School.

Along the way, she thought about a career in journalism. A college professor told her, “There is no future for a woman in journalism unless you want to write the society page.”
She switched gears to wanting a career as a geologist.
“My professor told me there was no future for a woman in geology,” Tepper said.
So, she used that sociology degree to return to New York and become a child-protective services social worker and shortly after that, a caseworker at Hillside Children’s Center. 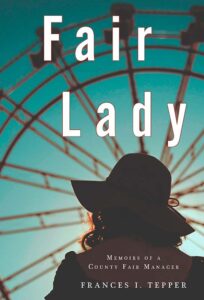 “Then our children came,” she said. Married to her high school sweetheart, Bruce, a RIT-grad aerospace electrical engineer, she then spent 17 years as a stay-at home mom.

Until the day she took over as the manager of the Wayne County Fair.

No woman had the chutzpah to step into that role before. Tepper not only wrangled the role, she lived every day to overcome the biases and objections of a legion of men and other naysayers so she, a woman, could substantially change the fair and revitalize it…for 20 years.

And now she’s written a book about it: “Fair Lady…Memoirs of a County Fair Manager.”

The vice president of the fair board, she had to take the reins in 1992 when the president became ill four months before the summer opening.

Tepper suddenly had to manage a fair that was “a disappointment, with little agriculture, expensive to attend with a reputation for fights.” The town of Henrietta supervisor called it “sleazy.” The state fair association termed it “an embarrassment.”

Her transition to the role of manager, at the time, seemed like the normal thing to do. “Only in retrospect did I realize how difficult it was. It would have been much easier if I didn’t have to deal with the resistance of the men on the board and other officials. I had people on my board just looking for reasons to undermine me. There were people in the town and positions of power who did not like me there,” she said.

“I always felt like I couldn’t make a mistake — I had to be perfect, and nobody’s perfect,” she added. “That’s an awful lot of stress to put on yourself.”

She discovered ways to manage.

“I found that a wine glass or two of Amaretto was a good way to cope with the trials of being a facility manager,” she wrote in the book.

Years earlier, Tepper had gotten heavily involved with 4-H with her daughters, who started a project to raise two rabbits. She led the newly formed Curious Critters 4-H Rabbit and Cavy (guinea pig) Club and was too successful – 200 rabbits later she had a “What have I done?” moment.

She found that she loved the strong connection between the county fair and 4-H. She felt the fair existed for 4-H, not the other way around. To push for 4-H, she joined the fair board.

And when she took over that poor fair in 1992, she didn’t hesitate to make changes.

“I stopped the fights in the beer tent,” she said. “First thing we did was get a new carnival (midway) – new rides, features, entertainment – from Amusements of Rochester. They have since become Powers Great American midways, one of the premier carnivals on the East Coast. That’s what I loved about them — they were brand-new. Their rides seamed to sparkle. Their maintenance was excellent; their safety track record was excellent. They were hometown people who wanted very much to serve their hometown fair. It was a good partnership.”

“Next I brought back 4-H and worked with them a lot. We started a youth group with the Monroe County Youth Bureau — Youth Taking Action — they want to reach kids, through their talent. We instituted a step-dance program that became very popular. We had competitions,” she added.

“These were kids who were learning how to become productive members of boards and committees. It was wonderful to work with them because they were so excited and so responsible,” she continued. “All I did was stand back and give them every bit of support they needed and ran with it.”

They also really stepped up security, made sure the fair was a safe place for families.

“I would meet with a whole bunch of security people before the fair—state police, Monroe County Sheriffs, ambulance people, town fire marshal and fire chief – we were probably the safest place on the planet,” she said. “I wanted it to be a family event. I didn’t want people not coming because they were afraid of fights or gangs. So we really tried to keep it as family-oriented as possible.”

They brought in local talent.

“We couldn’t afford national talent,” she explained. “We tried to find local talent that would bring people in, music mostly. I formed a Home Arts community — a lot of those were dying away — crocheting, weaving. I formed a committee to see if they would bring in some innovative ideas.”

They came up with the idea of doing a community service project. Every year they would do something — knit scarves or lap robes, “a whole bunch of different things.”

“The response from the community was overwhelming. In the first year, we made 1,000 lap robes. We hung every single one of them. That brought in more people to exhibit in our home arts department,” she said. “That spilled over into photography and flowers and helped get more of the community involved.”

More than along for the ride, was her husband, Bruce. He had flown to California to marry Fran while he was still in college. And in the early first years of marriage, “He was my port in the storm.

My life was so chaotic. He was so stable, strong and something I really needed in my life,” she said. “I loved his family, too, and I needed that.”

The Tepper newlyweds came back to a trailer home in Hamlin, but when Fran got her job at Hillside, they moved into Rochester, on Linden Avenue.

When Fran started her fair work, Bruce was there, too. In the book, Fran notes a job Bruce took on all by himself.

“He was the official food tester. He would eat at all the concession stands and report which ones had the tastiest offerings,” she said. “He said it was the best job at the fair.”

The book is full of the history of the fair and readers will get reacquainted with the alligator wrestlers, the Catholic retreats, motorcycle swap meets, gun shows, Mrs. New York America pageants and Islamic prayer services that were held on the fairgrounds when the fair wasn’t being held.

Tepper goes through a long list of changes she made. “The problem was that I couldn’t say ‘No’ to anything,” she said. “I have always been the champion of lost causes and helpless cases. So, if an idea sounded like a good one, I’d of course say, ‘Let’s do it!’”

“Smiling, happy faces…seeing grandparents with grandkids enjoying themselves inter-generationally…watching the 4-H kids take leadership roles…watching all the things we planned for a year come together to create what we anticipated it could be,” she noted.

She walked away from the fair at 67.

“My husband was already retired, and it was time for me to get my blood pressure under control. It was hard, very hard. Leaving the fair was difficult for me. It had been a passion of mine for 20 years, working 60 hours a week. It was almost like a loss, like a grieving process,” she explained. “That’s why I wrote the book — it was cathartic, to put closure to it.”

Featured Image: Fran Tepper, 76, was the manager of the Monroe County Fair for 20 years. She has written “Fair Lady; A Memoir of a County Fair Manager” about that extravagant experience, the history of Rochester and the challenge facing a woman trying to succeed in a male-dominated environment.