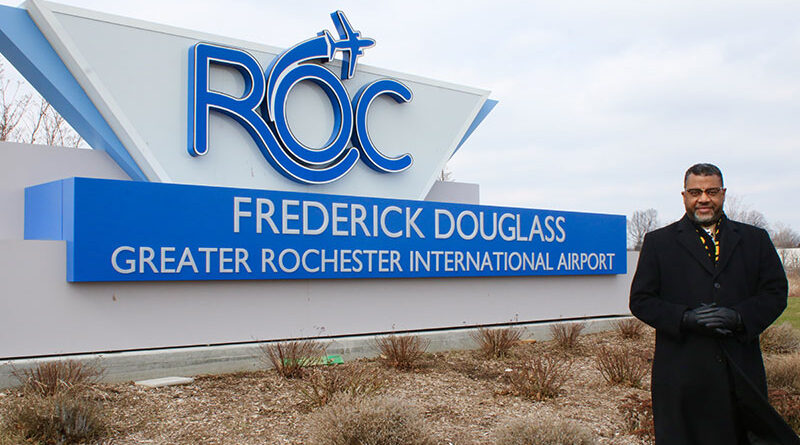 Reverend hopes to bring more notice to Douglass, who lived in Rochester for 25 years

The Rev. Julius Jackson Jr. cares a lot about Frederick Douglass. He thinks you should, too.

For the last two decades, Jackson, 55, has been “turning the dirt” to bring more local notice to Douglass, a self-made man who championed individual rights for all — the only African American to attend the suffragette movement’s first Seneca Falls convention, for instance — on a lifelong voyage that changed the fate of millions of Americans.

Douglass lived here for 25 years. And from here, he built a career as an author, lecturer, diplomat, world traveler, abolitionist, civil rights pioneer and journalist — all this from an escaped slave who literally taught himself to read.

Douglass is buried here in Rochester, alongside his first wife of 44 years, Anna Murray Douglass, and his second wife of 11 years, Helen Pitts Douglass, and his youngest daughter, Annie. There is a monument to him in Highland Park and 13 replica statues throughout Rochester.

And now, through Reverend Jackson’s efforts, the Rochester Airport has been renamed to the Frederick Douglass Greater Rochester International Airport.

But Jackson isn’t done yet.

“I joined Alpha Phi Alpha Fraternity and I was immediately put to work to raise funds for the Martin Luther King Memorial in Washington,” Jackson said.” It was my fraternity that started that project back in 1968. We had a long haul to get that done. They didn’t break ground on that until 2006, when I was invited as a VIP guest for the ground-breaking of the memorial in Washington.

“Famous people like Tommy Hilfiger, Russell Simons, Bill Clinton, George Bush, Barack Obama, John Lewis — they were all there. The speaker who touched me the most was Ambassador Andrew Young, a confidant of Dr. King, a civil rights foot soldier. He took the stage and he said, ‘Today we turn the dirt for Martin Luther King; I charge you to go back to your towns and turn the dirt in your towns.’

“I interpreted that to mean go back and do something to uplift whatever it was that was hiding in your town,” Jackson said. “For me, that was Frederick Douglass.”

Jackson was also turning some dirt in his own life. He left Xerox to work as an outcomes manager for Action for a Better Community and was a career development specialist for Wilson Commencement Park and the associate director of the Minority AIDS Initiative for AIDS Care.

And then the big shovelful.

“My calling to the ministry was a sneak attack or divine stealth move. Being a son of a pastor preacher and the grandson of pastor preachers on both my paternal and maternal sides, I had little to no desire to pursue ministry. After Xerox I entered the workforce at community action agencies. My concern and love for the community was greatly enhanced through work and socialization at those agencies.

“While at AIDS Care, I came in to contact with folks in ministry who did not fit the paradigm of what I grew up thinking ministers were. In tandem with this, I would regularly be asked to speak at various events. With many meetings being held at Colgate Rochester Divinity School, I became very familiar with the staff of the school who would regularly ask if I would consider taking classes there. I guess God decided to place a curiosity in my heart.

“I decided to pursue taking of a class at or two at Colgate while working. Within a matter of weeks, I became a full-time student at Colgate in 2010. Somewhere between 2012 and graduation in 2013, the call became undeniable. I was hired as the full-time resident pastor at East Aurora Christian Church. I didn’t pursue the call; the call pursued me,” he said.

His quest after the 2006 trip to Washington was to get the airport renamed after Douglass, but he had to raise awareness first.

“I ended up doing something I thought was a simple thing. We had the statue of Frederick Douglass, the monument, in Highland Park. You couldn’t see it during the day let alone at night, so let’s light up the thing. I led a couple of demonstrations. We invited the community, specifically kids, to come out with flashlights at night to shine a light on Douglass to demonstrate he needed to be illuminated. I wasn’t the originator of lighting things up at night. I used the example of RIT lighting up high falls. I actually contacted RIT to see what they would do.

“At the end of the Frederick Douglass demonstrations for a couple of years, there was funding available for lighting the statue, but there was a concern that lighting would invite vandals. Fast forward a couple of years and Andrew Williams, a local historian/archivist in town, called me up to do a light-up again. The 200-year anniversary of Douglass’ birth was coming up. The reenergizing team started to replicate things I’d already done. They started lighting things up at night. They had statues — replicas of the monument, put up all over town. And then, the light went on for them — ‘Oh! You did this before.’ That’s when we sort of came together.

“More funding came into the county. Local legislator (now Assemblyman) Harry Bronson, stuck with me all through this — he never left the project. After the Douglass celebrations of 2018, the county said to me, ‘We’re going to expand on your thoughts even more: we’re not just going to light up the monument, we’re going to move it — to a more prominent location, to the corner of Robinson Drive and South Avenue.’ It was moved in 2019,” he said.

That statue, sculpted by Sidney Edwards in 1899, had originally sat in the Rochester Train Station at Central Avenue and St. Paul Street. It was moved to the Highland Park Bowl in 1941. It is reportedly the first statue in the country to honor an African American citizen.

At the ribbon-cutting for the new monument spot in 2019, Rev. Jackson let everyone know he wasn’t done yet. “I stated once again my dream to have the airport renamed. Richard Blazer started a petition drive and got 5,000 signatures on it, for the county to get a hold of renaming the airport.

“The rest of is history. That pushed it over the edge to get it done,” he said.

In a ceremony on Feb. 14, the airport got a new sign — The Frederick Douglass Greater Rochester International Airport.

The date would have meant something to Douglass.

“Born in slavery, he didn’t know his actual birthday,” Jackson explained. “His mother called him her ‘little valentine,’ so he took Feb. 14 as his chosen birthday.”

Shifting in his chair in the airport’s arrival lounge, Jackson dropped the hint that he and Frederick Douglass aren’t done.

“I want to build on all of this,” he gestured at the expanse of the airport. “Maybe we can do something like a presidential museum, something in the airport that’s easily accessible from the outside as well, an institutional piece that can grow and grow,” he said. “Things to inspire — something bigger. The hope is to have an education piece at the airport. We are in talks right now. Some people want to put up another statue in here. That’s fine and dandy. There is also a move for an official celebration — a full dedication, not only at the airport but at the monument and maybe the gravesite as well.”

Money is an issue, plus Jackson needs more people to get excited about Frederick Douglass. Jackson believes there are tourism possibilities — one more great reason to visit in the area.

“We need to get more people on the bus with us, once they see the value,” he said, drawing the final link to Frederick Douglass, who faced daunting challenges a hundred times in his life: “He kept coming back.”