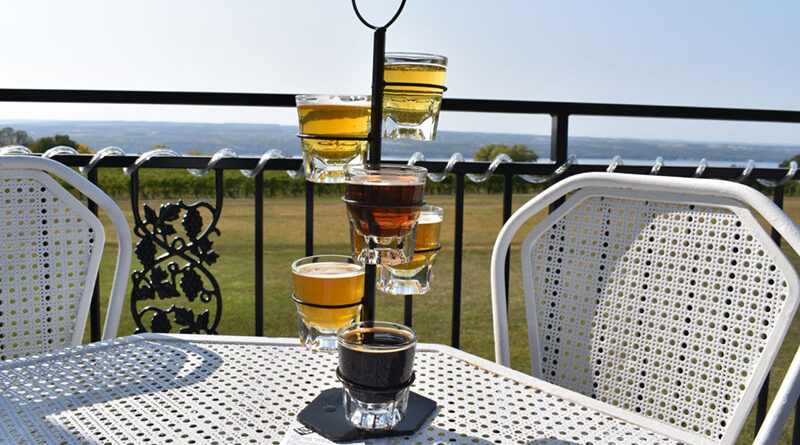 Finger Lakes winery gets a “W” for the win

Although Wagner Vineyards, a Seneca Lake winery in Lodi, wasn’t my initial intention, sometimes trusting your gut is the way to go.

I chose this location because of a photo of a chardonnay grape between a man’s fingers (@vineyardwarrior on Instagram) that stayed in my mind. With a push of the sun’s rays, the grape was glowing brighter than a lantern. It was a subconscious idea.

After such a year everyone has endured, when a desire comes to fruition, even a simple need to just take a ride with the windows down, it’s important to give in and do something that will put a mind, body and soul at ease.

As I sat at on the deck of The Ginny Lee Café, the eatery next door to the building with the tasting rooms and gift shop, the view beckoned — take it all in, put down technology, snap mental photographs and indulge in the fresh air. That was the moment when the flight I ordered was placed upon the table.

As an indecisive person (like myself) or for someone wanting to try it all, which is also like myself, flights are great option. The Ginny Lee’s flights consist of six 4-oz. pours ($12.50, but $10 for four 4-oz. pours in the brewery). I opted for Daybreak Pilsner, Dockside Vienna Lager, Hop Tropic Part Deaux (a double IPA), Grace House Honey Wheat, Cross-Section India Pale Ale, and the Glacial Grind Coffee Porter.

Wagner Valley Brewery’s beer selection proves that you don’t need to go crazy and create elaborate brews to make an impact in the world of beer. The lighter options (the pilsner, Vienna Lager, and wheat) have great flavors and were quite refreshing. The IPAs are also solid with strong hoppy fronts and fruity finishes. The coffee porter boasted a great flavor and complimented dessert.

Honestly, I think Wagner Valley’s beer has gotten better. The last time I came here, I don’t remember enjoying the selection as much.

The crabmeat rangoons ($6.45) and French onion soup ($4.95) kicked off my meal. The rangoons, which came as a serving of five, were very good. The crispy, fried wontons were filled with a creamy blend of crab and cheese, and a side of ginger soy sauce came on the side. The ginger was not overpowering but just enough; however, I didn’t pick up on the crab as much as the cheese and herbs.

According to my server, the French onion soup has been the only consistent menu item. The Ginny Lee changes the menu seasonally but this soup has never been removed. After breaking the surface of cheese and bread, slurping down the beef broth stock, and enjoying each caramelized onion, it’s easy to see and taste why this item hasn’t left. Part of me wanted more of that stretchy, melted cheese but its OK. There have been a lot of salty French onion soups in my travels, and thankfully this is not one of them

Next, the pizza of the day ($7.75) arrived at the table. All the pizzas at The Ginny Lee are personal-sized. This specialty pizza came with a red sauce, cheese (of course), ham and mushrooms. The flavor met expectations. The size was just enough. The crust, well, wasn’t a favorite.

This crust fell short for a few reasons. It wasn’t crispy enough but that’s something I always forget to request. Its softness came across slightly spongey. Perhaps spongey isn’t the best word but that’s how soft it was. It seemed like a type of crust you could find on the shelf of a bread aisle. However, the flavor wasn’t as bland as a communion wafer.

Although I didn’t really need it, dessert completed the meal. I went with the bombe — a chocolate shell that housed tiramisu.

Little whipped cream flowers helped decorate the plate and a maraschino sat on top. This incredibly light dessert was definitely worth it. The tiramisu was very good and so soft it almost felt creamy. The balance of cocoa and coffee proved this duo is a perfect match.

I scheduled a wine tasting a couple days later because trying everything Wagner offers in one afternoon is irresponsible. Plus, spontaneous tastings are not happening due to COVID-19 restrictions. Wagner is requiring anyone looking to try their wine to go online and reserve a spot. It’s a very easy process that will take up two minutes of your time. Per person, each tasting is $8 to try five wines and enjoy complimentary popcorn.

Food must be purchased as well, if you’re going to enjoy beer or wine.

There were many things I learned and were reminded of regarding Finger Lakes wine: why New York excels at white wines, how this region is along the same latitude as Germany (hence the wine similarities), and how this year’s weather will affect the vintage. The staff members are very knowledgeable, eager to talk wine, and happy to answer questions.

The Ginny Lee, Wagner Vineyards, and Wagner Valley Brewing offer so much. There’s also a huge lawn to enjoy, to set up a picnic and relax, and it’s a great space if you’re looking to tire out kids and dogs. It’s also incredibly affordable. For the food and the wine tasting, the total with tips came to around $57.

If an outing to the Finger Lakes region is on your agenda, this place should not be missed.

Photo: Flight of six 4-oz. pours ($12.50) at the Ginny Lee Café, the eatery next door to the building with the Wagner’s Wines tasting rooms and gift shop.