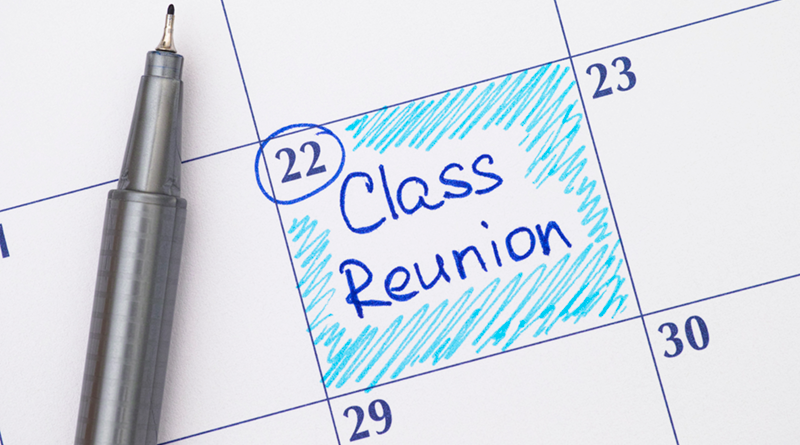 “If they haven’t bothered to keep up all these years, why start now?”

“I’ve gained too much weight.”

“I don’t know anyone anymore.”

Do you have another reason to not attend your class reunion?

According to www.grouptravel.org, only 20 to 30 percent of any graduating class attends a reunion. But you have plenLty of reasons to consider it.

“Go!” urged Jay W. Pruiett, licensed clinical social worker practicing in Rochester. “Whatever you’ve been avoiding all these years you can look at with new eyes. You can revisit and see how things are different.

“It’s an opportunity. You can see how things stand up over time.”

Seen through the lens of maturity, your recollections may help you understand more about yourself and how you arrived at where you are today.

“People have aged and we’re all elderly people now,” he said. “We can speak earnestly about our past. The people I felt close to then are those to whom I can speak sincerely about how things are going well, and things that are disappointing.”

Looking at former classmates as adults and not as adolescents brings “warmth and caring,” Pruiett added.

Morris enjoyed seeing people that he liked as a teen while not encumbered by the insecurities most young people experience.

“There’s little surprises that occur, like someone who says they had a crush on you when they were 13 and they never told you,” he said. “You may ask why and it’s because they were shy. It’s definitely worthwhile. If they have one next year, I’ll go again.”

In addition to reminiscing and reconnecting, reunions also offer classmates an opportunity to grieve the loss of those who have passed away.

“We evaluate what was special about our childhood and what’s good about being an adult and what you’ve learned that you can apply as an aging person,” Pruiett said. “It was a great experience.”

He thinks that those who avoid reunions assume others will treat them the same as they did in school or else they don’t feel good about themselves for some reason.

Pruiett encourages people to “develop an acceptance of yourself as a young person — what was difficult for you then. Have sympathy for yourself.”

Registered nurse Grace Harlow Klein, Ph.D., sees clients in the Rochester area. A group of her former classmates had planned a trip together which she could not join, but she did work out a weekend together with one special friend from the group. The women share the same birthday and reminisced about a shared sock hop that celebrated their 16th.

“We had seen each other a few times over the years, but not a lot,” Klein said. “We had a really nice time.”

“Take advantage of things while there’s still time,” she said. “You never know what’s ahead. Now is the time. When you take advantage of those opportunities, those can be really positive experiences and they may not be possible later on.”

She has known friends who were young sweethearts, drifted apart and later married after becoming reacquainted at a reunion.

“There’s a chance that with shared history, you can connect and find interesting things and sometimes people make a new life together from those reunions,” Klein said.

Nicole Lambert, licensed mental health counselor, operates Movement Counseling Services in Rochester, said that those attending a reunion without a partner should not feel self-conscious.

For any questions that cause embarrassment, turn the questions back on the asker. To keep conversation running — and pleasant — Lambert advises using broad, open-ended questions instead of those that can be answered by “yes” or “no,” such as, “What is best about your life now?” instead of, “Are you happy with your job?”

It’s also important to approach reunions with a healthy dose of perspective.

“We all have things we can work on,” Lambert said. “Just because someone’s life appears perfect on the outside doesn’t mean that it is on the inside.”