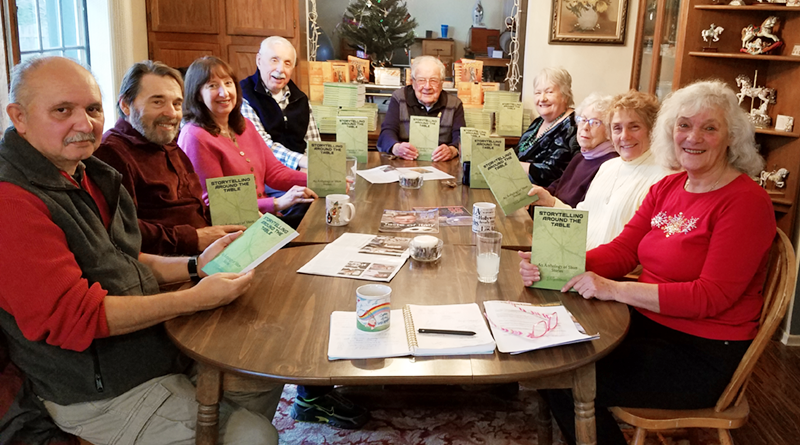 Patricia Edelman of Brighton is a retired school librarian who felt the need to give voice to her grandfather’s stories of early life on the midwestern plains. So she joined the “Express Yourself in Writing” class at the Osher Lifelong Learning Center in Rochester to begin the process getting these important family stories on paper.

When her instructor, Barbara Murphy died, she suddenly found herself in the position of teacher and leader.

That was over 17 years ago. Today, Edelman, 93, still leads the class, which is still thriving. The group just published its first book of short stories, “Storytelling Around the Table” at the end of 2018.

The students in Edelman’s class range in age from their mid-50s to their 90s and come from a wide variety of backgrounds, including a surgeon, two combat veterans and a social worker, among others.

Their differences don’t matter when they sit in class together as what binds them is their shared loved of writing.

Anthology contributor Sharon Lansing, 71, of Irondequoit, is one of the newer members who signed up in January last year. Despite some initial reservations, the welcoming and supportive atmosphere kept her coming back:

“What I have found to be so remarkable about this writing group is the sincerity and depth of the support we have for each other’s efforts,” said Lansing. “Through our writing we have come to know and appreciate each other and our unique perspectives on life. This writing group has been a surprising and singular experience for me.”

Her sentiments were echoed by everyone else in the class when they gathered in December to pick up their hot-off-the-presses copies of “Storytelling Around the Table.”

The connection to one another as friends and fellow artists was evident as they expressed their joy and excitement over their publishing achievement.

“The involvement with the class, not just the book but the whole fiction writing thing, has been an affirming experience. After a life of focused on work — I did social work — it’s been a chance to exercise my brain cells in a new way,” noted writer James Cornell, 69, of Livonia.

Storytelling Around the Table

Student and writer Judith Burns felt the special connection between the students and saw potential in each of their stories. Burns wrote her first book at age 72 under the pen name, J. A. Goodman. There are now three books in her Emma Mason mystery series that center around a homicide detective working in Rochester.

Her novel writing experience gave her a special insight into publishing, and she knew that this class could also create a special book. She presented the idea of an anthology of short stories to the class last spring, and it didn’t take long for the group to jump on board. Burns acted as the anthology coordinator.

Edelman called Burns “very organized” and knew that she was the perfect leader for this project.

Meetings about the book began in the summer of 2018 and together the class picked 31 stories to include in the volume. The stories range from fantastical tales of ghosts and spirits to science fiction mysteries about tricky aliens. There are also tales of love and family and stories of tragedy and longing.

“Everybody has been so genuine; they’ve written from their hearts,” said Burns. “They trusted me to put their stories in good form. I really enjoyed giving people as much help as I could so that they could be as good as they could be.”

She is quick to point out, though, that while she was facilitator of the anthology project she wasn’t “the boss.” They put their heads together to choose not just which stories to include but to agree on details like the cover, the back-cover descriptions and the dedication.

“We did everything together. I’m thrilled with the book,” said Burns.

Joyce Arnold, 73, of Spencerport brings a touch of humor to all of her storytelling. Arnold agrees that the act of writing is also an intimate and personal act of sharing. “There is a piece of all of us in our writing. You get closer to people that way,” said Arnold.

And close they are.

World War II veteran Bob Whelan, 93, of Penfield, recalled how writing helped him and US Army officer Steve McAlpin, 59, of Webster, deal with the reality of life back home after combat. Whelan advised McAlpin to share of the good in life as well as the pain in order to process trauma and difficulties. He and McAlpin were able to use their writing as a way to “get deep down inside yourself and reveal yourself to other folks,” said Whelan.

Several of the writers mentioned that they just wanted to focus on promoting and selling “Storytelling” before thinking about the next big group project.

Where to get ‘Storytelling Around the Table’

Copies of “Storytelling Around the Table” are available at Amazon.com as well as at Patti’s Pantry at 2485 Dewey Ave. in Rochester.