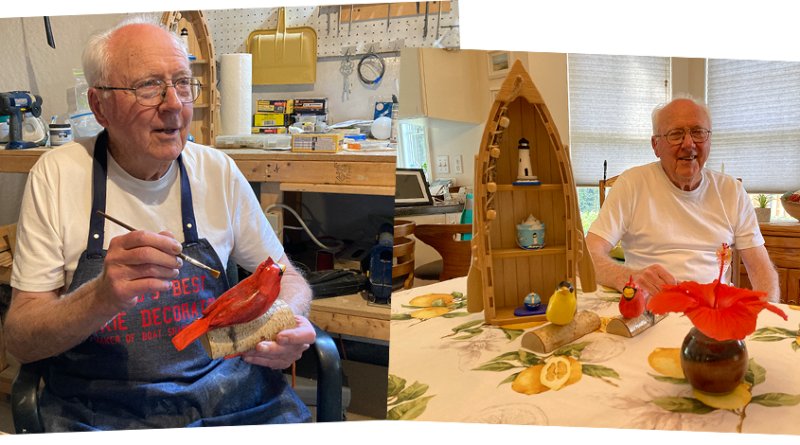 Howard Jones of Gates is a man of determination and has been, at all ages and stages of his life.

Perseverance could easily be his middle name.

The youngest of three children, he attended school in Rochester, Chili, Centerfield, Bloomfield and Canandaigua. He graduated from high school in Wolcott. He attended RIT night school for 13 years earning an associate’s degree in engineering and a bachelor’s degree in personnel administration. He served 12 years in the US Army Reserves, worked at Eastman Kodak for 33 years. Then, with his wife, Estella, (his cheerleader and main idea source) created a successful real estate business for another 13 years. They have been married 66 years.

It’s easy to see why there was no time in those early years to pursue a hobby. While they were raising a family, he was working at Kodak, attending Reserve functions and going to night school. Retirement was a fresh start.

It meant that he and Estella could spend summers in Maine and winters in Florida. Their love of the water was front and center for 20 delightful years. And one day, when all of those things from their younger life were in the rearview mirror, a hobby kind of snuck up on him when a friend gave him some scrap 3/8” oak boards. He was soon inspired to transform those scraps into jewelry boxes and small tables. Ideas began percolating in his head.

In 1999, when they were closing on a new home in Greece, their daughter, Wendy, left a welcome gift in the new house. She placed a 32” boat shelf in the powder room on the wall right behind the toilet. While the sentiment of the gift, honoring their love of the sea, was genuinely appreciated, he said, “Every time I used the bathroom, I was face-to-face with that boat. I immediately began to see shortcomings in its construction and would say to myself,

In fact, over the next few decades, he built and sold more than 200 boats; all much better built then the one that used to hang over their toilet.

One summer in Booth Bay Harbor, Maine, he saw a craft show in progress and pulled into the show’s parking lot and asked if he could show his boats. He set a few of his boats out for people to see. A woman bought one and gave him just enough encouragement and confidence that he decided to build and sell more boats. Eventually, he became known there as “The Boat Man,” from 2001-17. He built his unique boats to be 18”, 24”, 32” and 48” tall to an impressive 6 foot version. Each boat was meticulously constructed and included five different woods: fir, oak, pine, poplar and mahogany. The finish was smooth to the touch and pleasing to the eye. The pride he took in his craftsmanship was evident.

And he didn’t stop at making wooden boats. He designed and made lighthouses, beach buckets — anything with a nautical theme, what he would see while looking at the water, what goes on the water, what every lobsterman uses to get to his traps. And of course, he observed and carved sea birds: seagulls, pelicans, loons, terns, puffins and many local birds including bluebirds, goldfinches, chickadees and cardinals.

He carved Maine’s famous harbor seals, made doorstops, buoys, toast tongs, squirrel feeders and clever picnic table salt and pepper holders. He even made his own version of bean spoons. According to Jones, “Every kitchen needs one.”

And he sold hundreds of them over the years. The instructions were simple: Place the spoon in the pot when cooking beans. Do not remove. The spoon will get all the gas out of the beans. The little farts will climb the ladder and jump over the side.

As his skills and creativity grew, he was always up for the challenge of special requests and commissions. His largest commission is a 7-foot gong gate that sits along the bank of the Erie Canal in Fairport. His son-in-law asked him to make the first rendition (with a smaller gong) to replace a doorbell. The second version holds an impressive 4-foot gong. The gong gate itself weighs more than 300 pounds. A stunning photo on glass of the entire piece hangs in their home.

His most unusual commission was also designed and built for their family’s Fairport home where a basement egress window was continually trapping frogs. He designed and built his now-famous and still-functioning, frog ladder so that the little critters can safely escape.

Then along came the pandemic and his outlets for sales and inspiration vanished. No more trips to Florida or Maine. No more craft shows. No more meeting and greeting an appreciative public that purchased his creative work.

And so, he came to the difficult decision to sell his trusty and much-loved woodworking tools: a table saw, a drill, scroll saw, band saw and router. He was becoming less and less comfortable with the gong drives to Maine and Florida and he began to be concerned about his aging reflexes as he worked with power tools. By his own admission, he is a perfectionist and if he couldn’t continue to produce a perfect product, he decided it was better to quit while he was at the top of his game.

Anything he does now is with hand tools.

He listed his tools for sale on the local Next Door app and in a relatively short time, his workshop was a fraction of what it had been for decades. He advertised the sale of the inventory he still had wrapped in boxes (everything was always carefully wrapped) and, rather than focusing on how much money he could make, he took mostly whatever money people offered and found great joy in how happy his pieces made people. In his view, it was “a win-win situation.” He even made some new friends in the process. Maria Delgado Sutton saw his posts about the pieces he was selling, went to his home and made purchases. She went back several times, bringing curious friends who also admired and purchased some of his work.

Today, they are officially friends.

“Howard’s story is one I will always treasure,” said Delgado Sutton. “I love hearing him talk about the pieces he creates. His smile is contagious and the twinkle in his eyes speaks volumes about his love of life. More importantly, I want other people to know his story.”

Teresa Schreiber Werth is a freelance writer, author and certified funeral and wedding celebrant. You can learn about her recently published anthology, “Navigating the Pandemic: Stories of Hope and Resilience,” at www.dandelionbook.com. You can reach her at terry.werth@gmail.com