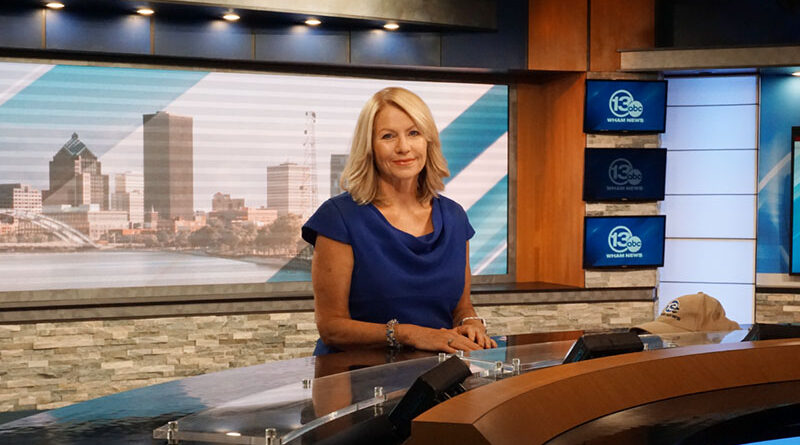 “Every day is different, and I learn something every single day,” the 56-year-old says.

Ryan co-anchors two newscasts at 13-WHAM, anchors a third, and covers stories on her own. During her many years before the camera, she has related the tale of two long-lost sisters who found each other, done a series about teen suicide and covered the 9/11 attacks.

Those who enjoy Ryan’s work can thank a teacher for starting her on her way.

Eight-year-old Ginny was having a hard time when she walked into her third-grade class at the Washington Irving Elementary School in Gates. Her father had just died, and her mother had been forced to go to work for the first time in her life. Ryan really didn’t like to learn, and was worried about her mom.

“I didn’t really like going to school, because that meant leaving her,” she says.

Maureen Ryan (no relation), the class’s teacher, took Ryan under her wing.

“She really played such a role in not only teaching me to write and to love to write, but really getting me to be a learner in school,” Ryan says. “She believed in me.”

Ryan never forgot the teacher who helped her all those years ago, and the two have become good friends.

“At the time, Watergate was the big story,” Ryan says. “That was really the reason why I wanted to be a journalist, in addition to knowing that I loved to write so much.”

Ryan acted on that ambition at the now-defunct Cardinal Mooney High School, where she wrote for the Greece school’s paper. After graduating, she headed off to SUNY Buffalo. She initially majored in journalism, but the campus newspaper was unwilling to allow a freshman to report the news. Dejected, Ryan walked around the campus until she spied a notice that WBNY, the college’s radio station, was looking for a news writer. She applied, and got the position.

“I walked in and started writing the news,” Ryan says. “I loved it more than I could have imagined.”

Though Ryan liked hearing others read her words on air, she stayed away from the microphone as much as she could.

“I hated hearing my own voice,” she says.

Then she ran into two men who were in the process of starting a closed-circuit television station on the campus.

“They said ‘We need a girl. Want to be the girl on the TV station?’” Ryan says.

Ryan auditioned for the position, and soon found herself doing the weekly “Bengal News” show. Recognizing that there were more opportunities in television news than in radio news, Ryan decided to seek a career before the cameras. She also switched to studying broadcasting and political science.

In her junior year, Ryan’s interest in politics took her to Washington, D.C., where she did an internship in the office of the late Margaret Heckler, who was then secretary of health and human services in the Reagan administration. The position, which was in the office of Heckler’s speechwriter, could have led to another career change.

“They offered me a job after that, but I decided to stick with journalism,” Ryan says.

While in Washington, Ryan met another intern, Jeff Curran. The two dated, and eventually wed.

During her senior year at college, Ryan borrowed her mother’s car and applied for jobs at television stations in Upstate New York markets as far-flung as Plattsburg and Utica. WENY, an Elmira station, decided to take her on. After graduating, she headed right off to start her new job.

“We kept the car loaded up right from college, and my mom drove me right down,” Ryan says. “I was in a hurry to get to work.”

In 1987, Ryan headed back to the Rochester area to take a job as a news reporter for WOKR, the precursor of 13-WHAM. After just a short time on the job, she covered a murder that had taken place on a Rochester street.

“That was the first time I’d ever done live reporting from a scene,” she says. “It was probably the most scared I’ve ever been.”

Ryan eventually began anchoring news shows for the station, in addition to reporting from the field. Allison Watts was one of her producers.

“I was pretty green when I started there. She was already experienced, established and respected,” Watts says. “She was a mentor to myself, and a lot of people.”

The experience led to a friendship. Watts, who did not have family in the area, often spent holidays with Ryan, her husband and their children at their Pittsford home and the family cottage on Conesus Lake.

“Some of my fondest memories are just hanging out on the dock or on the boat with her, and just laughing, and catching up on stuff, and sharing stories,” Watts says.

Though easy with her co-workers, Ryan was always in control before the cameras. If the teleprompter failed or the live shot wasn’t ready at the right time, she didn’t lose her cool.

“You would have no idea, looking at her face, that anything was going on, while behind the scenes things could be up in smoke,” Watts says.

Don Alhart, the associate news director of 13-WHAM, is the dean of local news anchors. He never worries that Ryan, with whom he has co-anchored newscasts for almost 30 years, might drop the ball while working on a story.

“In a day and age when a lot of people are rushing to get something on as soon as it’s on Twitter and Facebook, Ginny is always the one who says ‘Let’s vet this, let’s make sure,’” Alhart says. “You feel more confident in the product as a result.”

That ability to stay calm at tense times stood Ryan in good stead on Sept. 11, 2001. Though slated to start work at 3 p.m. that day, she headed to the station at 9 a.m. after learning of the terrorist attacks.

“When something like that happens, if you’re not in journalism, you’re just utterly shocked by it. The only difference is, we have to jump into work,” she says.

That began a series of long days for all at the station who covered the attacks and their effects on the country. Through it all, Ryan kept her horror at bay—temporarily.

“You just kind of put it into your back pocket,” she says. “It will always hit me a couple of days later.”

As difficult as those days were, when Ryan speaks of them comforting scenes come to mind.

“The one thing I remember was people going to church that night, and people making ribbons to raise money for the victims and their families,” she says. “People just came together without being asked.”

The rapid spread of the coronavirus, and of COVID-19, forced Ryan and her colleagues to shift into overdrive again.

“9/11 was intense for maybe a couple of weeks, but this has been a sustained effort like no one has ever gone through,” she says.

Not only have those at 13-WHAM had to work harder than normal to cover the story, but they have had to do it with a skeleton staff in the newsroom. To reduce the risk of spreading the coronavirus among its employees, the station sent just about everyone but its producers and news anchors home to work remotely.

As important as it is to cover national problems and events, local ones often draw Ryan’s attention as well. Back in 2016, she presented the tale of two sisters who were adopted as young children by two different local families — one in Henrietta and the other in Gates. With information from the state’s Department of Health Adoption Information Registry, the siblings were finally able to meet decades after being adopted.

Ryan still remembers how it felt to cover their story.

“I got such a charge out of it,” Ryan says. “That was a fun story because it was a journey story, and I love journeys.”

Other local stories are not so pleasurable to cover, but concern important issues. The suicide of a 16-year-old girl in Texas left Ryan wondering how often such tragedies occur, and what was being done to prevent them.

“Why was this happening? What’s happening to kids? What was being done about it?” she says.

Ryan ended up doing a series of stories and an hour-long special on local teen suicides. Among those that she interviewed for the special were the parents of Makenna “Kenna” Dadey, a Chili teen who died Jan. 10, 2017 as the result of a suicide. She was just 13 years of age.

After the Dadey family suffered its tragedy, Kenna’s father Pat created Kenna’s Fight. The nonprofit seeks to raise public awareness of mental health issues, and supports measures to prevent teen suicide. Suicide is the second leading cause of death among Americans 10 to 24 years old.

“We don’t want another family member or family to go through what we’ve gone through,” Pat says.

Kenna’s Fight has held three fundraisers in an effort to finance those efforts. Ryan has continued to report about the problem of teen suicide, and has emceed all three events. So far, the nonprofit has raised $21,000.

“She just wants to help in any way she can,” Pat says.

For more information on Kenna’s Fight, go to www.kennasfight.com.

On her off time, Ryan enjoys hiking, biking and cross-country skiing, sometimes with her husband of 33 years, and spending time with her family at their home on Conesus Lake. She also likes to travel and read, preferring self-help books.

Though she’s the mother of two grown children, Ryan just signed a new contract with 13-WHAM, and doesn’t intend to slow down anytime soon.

“I actually feel more energized now that my kids are raised,” Ryan says.

It helps that her husband Jeff is “super-supportive” of her.

“He never questions if I have to run out on a Saturday night, like I did recently.”

Ryan’s dedication to her profession and achievements have drawn praise from a number of organizations.

The National Women’s Hall of Fame presented her with its “Keeper of the Flame” award in 2019, and she has also received the Victor Chamber of Commerce Women of Excellence award.

In 2018, she and 13-WHAM co-anchor Doug Emblidge were inducted as a team into the New York State Broadcasters Association Hall of Fame.

1. She grew up watching local news anchor Don Alhart on television, and now works with him.

2. In her first on-air job in television, Ryan made only $4 an hour, less than she made when working summers as a lifeguard.

4. When Ryan was 13 years old, her older sister gave her a dictionary. She still has it.

5. She loves vacations that involve something scary, like swimming with sharks.