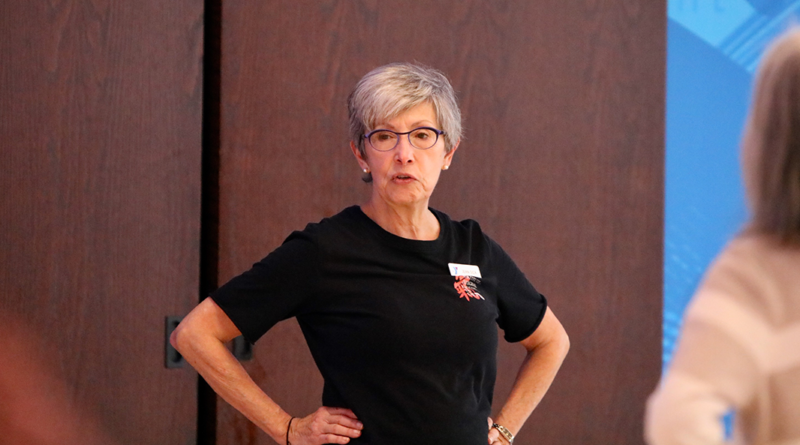 Jean Sica is no shrinking violet. And you don’t have to be, either.

“Don’t put limitations on yourself,” she firmly tells women who doubt their capabilities.

Looking for an example?

“I was always afraid of swimming or drowning,” she said. “I never learned how to swim until recently. I grew up in Brooklyn. My mother didn’t swim. She sent me to swimming lessons when I was 12 at the YMCA in Brooklyn. I was standing there next to the pool with a whole bunch of kids smaller than me. Someone tells me to jump into the water, one of the instructors. I can’t swim.
’Jump in the water!’ the instructor tells me.

“A trusting Catholic girl, I jump in the water, I go down, and I don’t come up.” 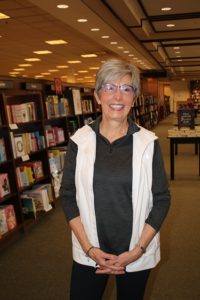 There, at the bottom of the pool, 12-year-old Sica did not enjoy the panic and fear that froze her.

“I remember people jumping in the water to get me out,” she said. “I was so deadly afraid of water after that.”

We get to an age — Sica happens to be 69 — where a lot of things that never really concerned us suddenly do.

“I tried to face my fear of water over the years,” she said. “I’ve always been the kind of person who will do something just to prove I’m not afraid of it, to prove something to myself.”

She finished college at night. She married. She had two kids. She lived in Syracuse before coming to Rochester. She started a career in advertising and ended up in law publishing as an editor and proofreader. She divorced.

And that feeling of being at the bottom of the pool looking up never left her.

But then, “After my divorce, I met a man who had a sailboat. He taught me to sail, I was a member of his crew and in races. I never would have thought that I’d be able to do the things I did on that boat,” she said.

“Wow. Talk about limitations —having a view of what you can be limited to — I took up downhill skiing and I had always been afraid of heights. It was just like a beginning. One thing led to another in my life when I came to realize how often we talk ourselves into what we cannot do,” she continued.

Today, Sica is a certified personal trainer. Many people know her as a tai chi and qigong instructor. The services she offers through her business, Kokoro Fitness, are what she terms “concierge personal training.”

She comes to you at your home or business. She gets you in touch with your qi (or chi) — the vital force that runs through your body.

“I feel like I was meant to do this,” she said with the earnestness of a convert. “The first time I taught a large tai chi class was at the Irondequoit library. I had a class of 35 people. Some of the women came up to me afterwards and told me how good they felt and they were all smiling. I came out of there feeling wow!

“Since then, I’ve had people come up to me who had Parkinson’s to tell me how great they feel. There was a woman in my class recently who told me she found her balance was better right away and she felt so much better.”

Tai chi isn’t just a graceful exercise; it’s a liberating feeling waiting to visit you. Sica tells her students and clients there’s a particular way to stand when doing tai chi, “to leave space between your legs, between your arms and your body…and in your heart. Open yourself up to this possibility — don’t put limitations on yourself.”

“One of the things that inspired me to do this was my wanting women in their 50s and up to realize what they’re capable of. It makes me so sad to hear a woman say, ‘I can’t go there because I can’t walk that far anymore, or I can’t do this…or I can’t do that.’ But they can do more,” she said. “Maybe they can’t do what they did in their 20s, but they could do so much more. I know that. I know from my own life experience.”

She teaches tai chi and a little qigong for warm-up movements at the Pittsford Schottland Family YMCA and the Pittsford Community Center and in Penfield. With her growing list of individual concierge clients, she contracts for 10 one-hour lessons which are normally once a week but can spread out.

“I’m very client-focused on what they want to accomplish,” Sica explained. “Specifically, when I teach tai chi as a personal trainer, we use elastic resistance bands. Even without using anything extra, tai chi strengthens your muscles, but resistance bands add an extra dimension. 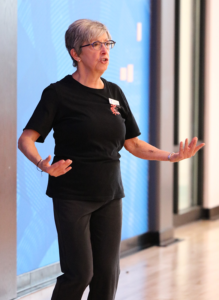 “Part of the sessions depends on what they want to do. If a woman is much more interested in learning tai chi than in strength training, we will work on tai chi. In our first meeting, we talk about the basics of tai chi — stance, breath — the difference between shallow breath and diaphragm breathing — awareness of your feet and how it feels to press the bottom of our feet to the ground.

“Then I teach several simple tai chi moves. That would be part of the warm-up, perhaps. Then if she’s amendable to elastic bands, we use them. I always like to include — I assume the person is also interested in strength training — light hand weights. We’ll do different kinds of workouts with hand weights. I like to do a lot of work with whatever they have at home, rather than have them wait for me to bring something because then they won’t work out on their own. I’m only meeting with this person once a week and if you’re doing resistance training of any sort, you should do it at least twice a week and the tai chi practice every day.”

Sica began her college education in New York, continued it when she moved to Syracuse with her husband, and finished up years later in night classes in Rochester at Empire State College.

A city girl growing up, the move to Syracuse was a monumental shift in her life.

“Being from New York and not knowing anything about Upstate New York — Upstate was the Catskills, right? — I really did believe that any job I could get would be milking cows by hand,” she said. “I honestly believed that. I was 24, I didn’t know any better. I ended up working in the agricultural and dairy fields anyway, doing public relations for Dairylea Cooperative and Agway. But, I wasn’t milking cows.”

She also found out that Syracuse and Rochester are completely different worlds. When she came here, she had no contacts to help her get a job.

“I decided to be a stay-at-home mom. However, I continued to work by freelancing as a proofreader and editor and also have a little side business as a newsletter editor. I worked for a local advertising firms; mostly proofreading.”

“I just didn’t want to work for anyone else anymore. I wanted to work for myself. I needed to do it on my own. By my own rules,” she explained. “It’s interesting because when I was young, I was so shy, so shy. I couldn’t speak to anyone. I learned how to go outside myself and see what other people needed and focus on those needs, focus on the other person.”

When her eldest daughter was 16, Sica decided to go back to work full-time, at Thomson West, which at the time was known as West Group. Years before that it was Lawyer’s Coop. She spent 18 years there as a legal editor and writer.

“I was so burnt out,” she remembered. “I was at a computer all the time, even if I was standing, I was still in one place. I have a lot of energy. I believe in being physically fit. I wasn’t engaging with people at all. I was just on the computer all the time. It was quite depressing. I didn’t feel like I was contributing in any way, I didn’t feel like I was helping anyone.”

She had started learning tai chi in 2013 as a member of the Rochester Zen Center. 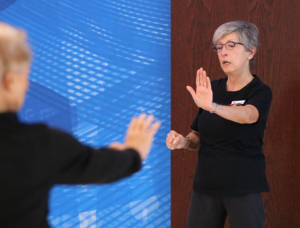 “I immediately felt it was the right place for me. It just felt right. Then I had a positive experience. I had carpal tunnel and it felt so much better after doing tai chi. After I had a carpal tunnel operation, I went back to tai chi — it helped me heal that much more quickly. That’s when I realized that tai chi, for me, was not just good for my health; it was good for my mind and spirit because it’s moving meditation,” she said.

Most of her private clients “don’t want to go to a gym or a YMCA because they don’t want to be around a lot of people. They want to get deeper with tai chi, not just the movements, but to get a better grasp on what it means to experience their chi. They want to do more with the mind–body connection,” she said. “The individualized structure is important for them; they don’t have to share their time with anybody. Doing it at home is a big deal for some people, as they have my full attention.”

There’s a statement on her website that’s an implicit invitation for her to help someone become more: “Over and over again, I take steps, sometimes it doesn’t work out, but more than often it does. It saddens me when I hear people say they want to do things, but they don’t take the steps to do them. Sure, you might be afraid — but if you really want something — take the steps! Afraid of failure? You automatically fail if you don’t try. Imagine if you succeed!!”