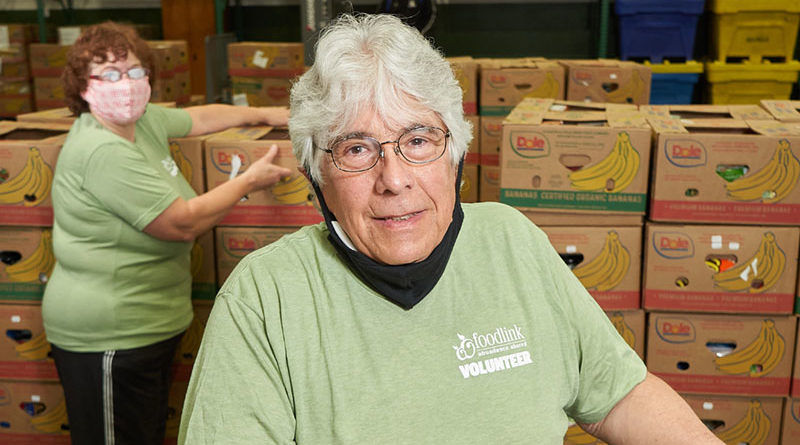 Foodlink: volunteers making a difference for more people than ever

“People going hungry in this country is kind of ridiculous. I worked on a backpack program, packing a bag of food for youngsters to take home on Friday so they have something to eat over the weekend,” said Matt Smith of Victor. “Because, actually, there are a lot of kids who go hungry over the weekends because of poverty, lack of care and for a variety of reasons. That’s amazing to me.”

Smith, 59, is a retired sales and marketing services director for a scientific equipment company. He’s done business around the world.

And he knows what it’s like to be hungry.

“I am sensitive to that,” he said. “I grew up in a rural area, where there were rural poor. It doesn’t matter if you live in the country or the city: When you’re hungry, you’re hungry.”

He volunteers at Foodlink and finds the experience has recharged a part of him.

“I didn’t want to be unhappy anymore chasing the world to make a buck,” he said. He was able to retire early but didn’t want to sit on some board; he wanted to feel like his contribution was much more direct.

“I think the effort I put in has immediate and tangible actions that people need. As a senior manager for many years, I got distanced from the people who really count — you lose track of them,” he said.

He spends about two days a week at Foodlink, sorting and packaging emergency food boxes for families and bags for kids’ backpacks. When he’s not at Foodlink, he helps out at the Habitat for Humanity Re-Store in Canandaigua.

Smith said Foodlink is encouraging more people like him to step up.

“They’re starting to get their arms around the idea that there are a lot of other folks who retired early and have the time to do volunteer work and like the mission of Foodlink,” he said.

Just what is that mission?

“To leverage the power of food to end hunger and build healthier communities,” Smith said.

Foodlink supports 250-plus emergency food suppliers in 10 counties. It takes its mobile pantry program throughout the area. Its Curbside Market brings fresh produce to people in need. It is one of the first established — and certainly one of the longest running — food banks in the country. Tom Ferraro set it up 41 years ago and shepherded its expansion into a dependable component of the community heart.

The agency was proactively smart and blissfully able to wrench into a higher gear when the pandemic hit.

Noreen Bischoping Crouse, 60, of Penfield, knew she had to be a Foodlink volunteer when she turned on her TV.

“I watched the videos of what was going on in other parts of the country, where people were lined up for miles, waiting for food, she said.

Skip Leonhard, 55, of Webster, was there as Foodlink geared up in March as businesses and plants closed in New York state.

“We were packing emergency food boxes to be distributed to various sites — like the Rochester Public Market — for people who had not been seeking assistance before this, but because of losing their jobs or being furloughed, they now needed additional assistance,” he said. “I was dumbfounded that there was such an incredible need. It had grown exponentially with the explosion of this pandemic.”

Because of the pandemic, “our numbers are expected to rise about 45%,” Dwyer said.

“A lot of those people are families we’re seeing for the first time,” he said, “people who are relying on an emergency food service for the first time. It’s startling for them; not the most pleasant experience. We want people to be comfortable asking for food. We’re here to serve everybody. There’s no shame in being hungry.”

Dwyer also amplified Smith’s remark about a new kind of volunteer at Foodlink. Before the pandemic, many of the volunteer shifts were taken by corporate or community groups, where a good number of people were available for a short period of time.

Once COVID-19 hit, Foodlink had to shift to a new plan because of Centers for Disease Control & Prevention regulations. “The United Way stepped up for the nonprofit community,” Dwyer said. Anyone who wanted to volunteer at Foodlink now had to go through a screening process via phone. Foodlink itself decided no one over 60 years of age could volunteer during the pandemic. Other volunteers couldn’t show up for their three-hour work shifts with a fever or viral symptoms, something that was screened for before they left for their shift.

Volunteer Laura Reitter, 57, of Greece was a volunteer when the pandemic occurred. A business leader with a certified public accountant background, she has experience in operations and customer service, and is impressed with how Foodlink operates.

“The staff responded so quickly and in such a broad way with the community at the forefront. They were concerned about volunteer safety and were up and running with volunteer opportunities by mid-March, gathering people to start making a difference,” Reitter said.

With some of the older volunteers unable to come in, new groups formed quickly. “People decided what they wanted to do, what their talents were,” she said. “We changed locations from the downtown convention center to a warehouse on Manitou Road in Kodak Park, and it’s become a much more efficient process.”

“Everybody shows up to work,” she said. “People get embedded in the process because they want to work and they like the team. There’s nothing more rewarding at the end of the day. People care so much about helping others.”

Reitter spoke about how appreciative a volunteer was to be there, helping. “She said, ‘I said a prayer over the food I was packing in the box, and for the families who were going to receive it.’”

“We work,” said Noreen Crouse. “You don’t hear a whole lot of chitter-chatter. They know what needs to be done; I really want to get something accomplished. Supervisors are incredibly caring and very positive. They’re very careful in making sure everyone feels wanted and useful. I enjoy the whole environment, the whole concept of what Foodlink does. We are just so fortunate to have something like it here; how streamlined and efficiently we can get food to people.”

A special education teaching assistant at West Irondequoit High School, Crouse started bringing 12 of her students to Foodlink each month in 2014. “They got a great sense of accomplishment in providing something to the community, and we were able to incorporate social skills in a work setting such as communications, attention to detail, problem-solving, and teamwork,” she said. “We got to practice skills learned in the classroom to real life.”

“I have encouraged others to do this,” she said. “It feels good when we’re in a time where we’re told to stay home, but this is something we can do to feel part of the solution and right now it doesn’t feel like there are a lot of solutions.

“What’s nice is there’s a big teamwork component at Foodlink. You get to know people you wouldn’t know, people who are fun to get to know. Everyone has a good sense of humor, they enjoy one another and are willing to help one another.”

“We want people to show up for the right reasons,” he said. “They’re hard working, they come here to do the job and volunteer and to meet new people. Admittedly, it’s a little harder with all the social distancing and facemasks now — it’s not the social experience it usually is. But people still do have camaraderie in the mission. We’re building healthier neighborhoods.”

“I feel like I worked all day and did a good job,” said Leonhard.

He struggled to find something meaningful to help out in the pandemic.

“I’m not an EMT, a medical professional or in retail on the front lines helping people to get the things they need to live their lives,” he noted. “But in some small way, this was an opportunity for me to help other people.

“All I’m doing is putting food in a box and I’m sure I could be replaced with the next person coming in, but to know that you’re helping with this is so very fulfilling,” Leonhard said. “I also have been talking to the Foodlink people — I was amazed at the need. Packing and distributing boxes was only a small part of all we were doing; we were helping people, and there were so many food banks and other agencies throughout the area.”

“This pandemic has, if nothing else, shown us that circumstances for anybody can change on a dime. You might have thought you were set for life yesterday and this virus thing came around and now there’s a need. If you can help someone now and show that somebody else could help you later in your life, this is your opportunity to pay if forward. Understand that hunger is a real need.”

“We can play a vital role and help with that. You can visit the United Way website right now and see a list of dozens of places looking for assistance from volunteers,” Leonhard said. “The need is tremendous; if we’re not going to be at work, we might as well be there helping people so they can survive this situation, especially if we’re lucky enough to survive it ourselves.”

Debbie Leipold, 64, of Rochester, envies those who are helping because due to COVID-19 restrictions at Foodlink, she can’t volunteer. She’s past that 60-year mark.

She had completed 848 shifts in the last six years after, as she puts it, “Kodak dumped me after 34.5 years.”

She works in the Foodlink offices and has a special task: If you’ve donated to Foodlink and receive a thank you letter in the mail, Leipold folded it, put it in the envelope and sent it to you.

“Foodlink is family,” she said. “They do more for me than I do for them. During this COVID mess, people from Foodlink keep calling me to make sure I’m OK. They are watching over me.”

After Kodak broke her heart in 2012, “I needed to get dressed and do something, to get out of the house,” she said. “And I needed to do something that had purpose; everyone needs purpose.”

A longtime member of Eastern Star, she was part of a volunteer group that came to Foodlink and got hooked.

“People at Foodlink are so appreciative: you never get to feel like you’re being used. And I’ve had that in my life,” she said.

She sees another aspect of the agency. “One of the things I like best is they don’t just hand out food; they do a lot of education,” Leipold said. “A lot of young people don’t realize it’s cheaper to make food at home. The Foodlink Curbside Market (a special roving produce truck), with all that beautiful produce — young people don’t know what to do with vegetables, but the people with Curbside Market will show them and teach them. In these COVID-19 times, with prices so high, the Curbside Market will be even more of a Godsend.”

Reitter underlined the importance of what she does as a volunteer for an agency that helps feed people.

“Without food stability, we won’t ever get to fully recover. There’s so much unemployment, so much chaos in the world, with people in poverty or on the cusp of economic instability — they’re the ones who hurt. Food stability is critical,” she said.

“I’m giving back,” she added. “I’m helping to create something.”