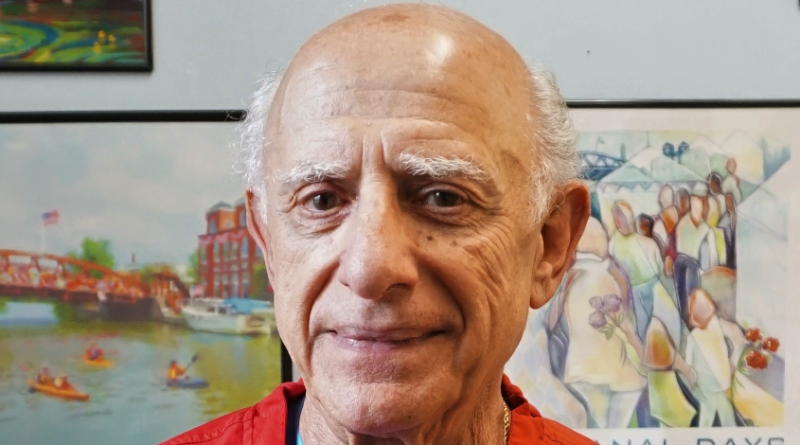 After more than 65 years as a barber, Rocco “Rocky” Ceravolo still has a good reason to come to work.

And those customers keep coming back for haircuts, and a chance to catch up with the popular barber on local news, family events and sports. “We don’t talk religion or politics,” Ceravolo says.

After finishing high school in Canandaigua Academy in 1955, Ceravolo enrolled in a barber school in Buffalo, intent on following his late brother Joseph into the profession.

“I didn’t have the money for college,” he says.

Ceravolo apprenticed at the Hotel Rochester, which once stood at the intersection of West Main Street and Plymouth Avenue in the city’s downtown. After completing the oneand-a-half-year program, Ceravolo married Mary Rinaldo, a Fairport native, and began barbering in a shop on North Main Street in the village of Fairport.

The late Ron Jensen learned of Ceravolo’s skills and offered him a chance to join the R & J Barber Shop as its third partner in 1972. The “R & J” stand for the first names of Jensen and the late Jim Apara, the business’s other founding partner. Ceravolo signed up.

Ceravolo now works alongside Jensen’s son Tim, the other partner in the business. But for 11 weeks R & J was closed in 2020 due to COVID-19, he’s continued to serve his customers at the same corner chair since 1972.

So, in many ways, it is the place where Ceravolo takes care of his many
customers.

A glass cabinet in R & J’s small waiting area is filled with barbershop
memorabilia, including an old-style straight razor, hand-operated hair clippers, a massage machine and an antique barbershop sign. In one
corner of it stands an aging plaque that reads “Member Monroe County
Barbers Association Inc.” One wall of the shop is filled with posters from Fairport Canal Days, the town’s annual summer celebration, and a second has photos of pro baseball players.

“I’ve been a Yankee fan since I was a kid,” Ceravolo says.

He was also a Green Bay Packers fan, but switched to the Buffalo Bills
after the death of Vince Lombardi, the Packers’ former coach.

A third wall of the shop bears photos of Fairport High School teams. From the 1960s to the 1980 s, many
of the players came to R & J for their haircuts.

“Rocky and his co-workers, they catered to the local athletes and their families,” says 61-year-old John Martens, who once played football for Fairport High School. “They were great supporters of the Fairport sports teams.”

Martens has continued to come to Ceravolo down through the years for haircuts—and conversation.

“The atmosphere at the barbershop is very, very home town-feeling,” says the Fairport resident. “It’s a very enjoyable experience to go there, catch up on local news, catch up on each other’s families.”

Altogether, five generations of Martens’ family have come to Ceravolo for their haircuts.

“Rocky has become a very, very close family friend,” Martens says. “We’ve become quite close to him and his wife Mary.”

Ceravolo is so dedicated to his customers that he’ll even head to their homes on occasion to cut their hair — three are over 100 years of age. He even cuts the hair of Rev. Peter Clifford, the pastor of St. John of Rochester, the Fairport church that he and his wife Mary attend every Sunday.

Though he’s in the shop only four days a week now, Ceravolo has no plans to retire.

The phone rang, and Ceravolo picked it up.