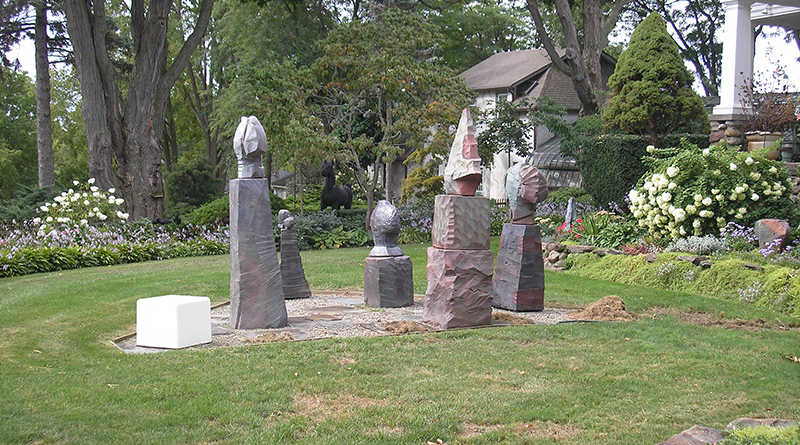 If you’re an artist, God only knows what that is,” Nancy Jurs says. “I call myself a sculptor.”

Jurs began her career throwing pots. She initially specialized in raku, a form of oriental pottery. After a time, she began using her gifts to create ceramic sculptures, mostly of clay. Later still, Jurs began using found objects, photographs and other materials in her work.

“Nancy is a very bold and clever woman,” says Margot Muto, a friend of Jurs and head of exhibitions at the Memorial Art Gallery. “She really draws connections between ideas that can take on more serious connotations in social or political ways, but it’s always very personal to her.”

That personal element manifests itself in a number of themes. “Emergence,” a pair of large ceramic figures from Jurs’ “torso” series that flank the MAG’s front doors, reflects the sculptor’s desire to empower women.

“It was all about women emerging from the rock,” Jurs explains. “They’re taking form, their elbows and shoulders are starting to come out; they’re starting to emerge from rock forms as strong women.”

Jurs began a new series after the 9/11 attacks in response to the way women are treated in some countries.

“I immediately stopped doing the torsos,” she says. “I turned them into armor, because even if they (women) do emerge, they’re going to need protection.”

Jurs has also sculpted armor for little girls and animals — she’s an animal lover. Her other series include “wall pouches,” which consist of functional shelves in shapes that suggest female forms or butterflies, and “blouses.”

The conflict-ridden state of the world has also drawn Jurs’ attention, prompting her to create her “world peace” series. Those works feature figures that are marching toward each other on a kind of chessboard.

“There is the black row and the white row on either side,” Jurs explains. “As you moved forward in any kind of aggressive movement toward the other side you became the same color.”

“Nancy Jurs: My Life Has Gotten So Busy That it Now Takes Up All of My Time,” her recent solo show at the MAG, included an installation from that series, but most of its offerings were of a different nature. One whimsical work, which filled an entire wall with mats of dryer lint, has a very long history.

Back in 1968, Jurs acquired her first clothes dryer. Upon opening the lint trap, she discovered a circular mat of the stuff her family’s clothes had shed.

Since then, Jurs has collected sheets of lint from every drier she’s had, some of which have had square traps. A number of years ago, she realized that she could use the pads to spell something out in Morse code, respectively signifying dots and dashes with the circular and square ones. “My Life Has Gotten So Busy That it Now Takes Up All of My Time,” one of Jurs’s works, spells out its name in Morse—along with a message.

“Just my ironic statement — as if anybody else can say something different,” Jurs explains.

That work filled one wall of Jurs’s MAG show, which drew over 7,200 people before it closed in September. Jonathan Binstock, gallery’s director, curated the exhibition.

“The installation was true to Nancy: generous in spirit, personally revealing, fun, innovative and quite the story about how she sees herself and world around her,” says Binstock, who also counts Jurs as a friend.

While showcasing Jurs’ talents, that show also helped her focus upon something besides her grief. Her husband of 50 years, the celebrated furniture maker and sculptor Wendell Castle, died in January of this year of leukemia.

“I had reason to not pout all day long, or mope, or be depressed,” Jurs says. “I had stuff to keep me busy — and that was a blessing.”

Though she admits the loss has left her in a “fog,” Jurs is looking for other venues in which to display her works.

“I’ve been sending out photographs all over the country, because I’m hoping to get a gallery somewhere for another show,” she says.

Jurs’s two children appear to have followed artistic paths, as well. Bryon Jurs, the sculptor’s son, heads the finishing department at Wendell Castle Inc., the Scottsville company his stepfather started. Author, editor and filmmaker Alison Castle is putting the finishing touches on a documentary film about her father.