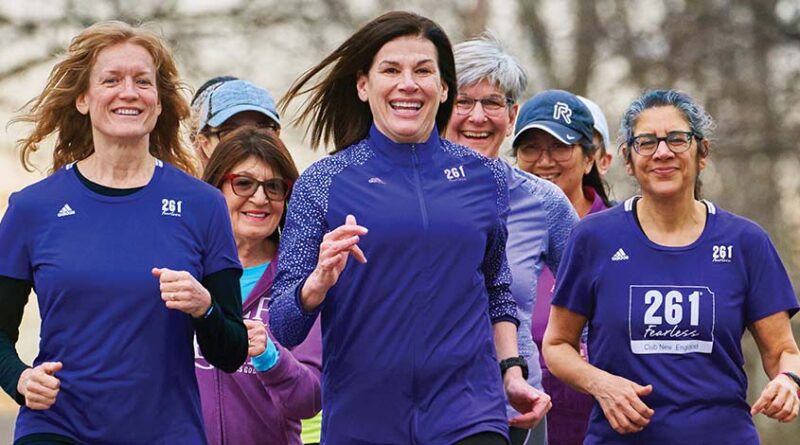 For Lori Fox and 261 Fearless Club, it’s all about letting everything go in pursuit of friendships through running and walking. It’s paying off big-time.

he best way to get someone to join your group is to ask them. Personally.
Marilyn Spampinato is living proof.

“I didn’t intend to join the group,” she explained. “I was sitting in Panera’s in 2018, right after Christmas, with my two friends, enjoying a little holiday thing, and one of them was talking about how she did this Thanksgiving run.

“A lady walked past us and her ears perked up at the words ‘running’ or ‘turkey trot’ or whatever and all of a sudden she does a walk-back. She said, ‘Excuse me for interrupting your conversation, but we have a running and exercise group, called 261 Fearless and we are out of Pittsford. If you ladies would like to join us, we meet Wednesdays at the rec center at 6 p.m.’
“Oh! Okay.” said Spampinato.

“When we were leaving, I walked up to the woman and said to her, ‘So do I just show up and say ‘Hey?’”

“When I got home, I told my husband. He thought it was a scam. He wanted to come with me,” Spampinato said. “I went. And I loved the group, loved the coaches. It was a meet-and-greet. I met people. I guess I’m a people person. It was 6 p.m. in December and it was dark, so they geared me up with a reflector vest, got me something for my shoes because it was icy out and I liked it and I continued.”

Spampinato, 76, from Henrietta is fit and has had a regular exercise regimen for decades. But there was something special about this 261 Fearless Club.

“What we do is promote socialization and empowerment of women through running,” said Lori Fox, 63, the coach of 261 Fearless Club GNY-Rochester.

She said, “When you have a mixed group, men and women, it can be intimidating for some women when they’re just starting out as runners.

Even though runners are the most amazing people and tend to be competitive only amongst themselves, women have a tendency to profile other women — ‘she’s faster’ or ‘she’s thinner and I can’t do that.’

“261 Fearless just becomes a really safe space for women for an hour a week to just let everything go, let home go, let work go, let kids go, and to meet other women and form friendships.

“A lot of the education I received on training to be a master coach was how to train women differently from men. Our anatomy is different, how we’re built is different, the way women’s hips are built – for endurance, not for speed. Our training focuses on taking the strengths women have by reason of their biology and going with that, but really focusing on the noncompetitive aspect.”

Fox said that the group celebrates members who achieve benchmarks, like running in a first 5K or first marathon, “but there’s never any pressure.”

A speech and language pathologist with the East Irondequoit Schools, Fox guides the club’s activities.

“We always start our meetings with some kind of icebreaker,” she said. “It can be a silly game. We also want to work the brain. As you get older, word-finding, memory, that quickness to process slows down. So, we do some of those fun kinds of processing — name games, what’s your favorite such-and-such? Fill in the blank. When you’re laughing and having fun, your defenses come down and you’re more willing to be open and accept. A woman new to our club will never run by herself. The coach will always be with the new runner or one of our other women will do it.”

“The socialization is fantastic,” said Janet McCarten, 54, of Penfield. “Lori and the other coaches will do really fun silly active things – jump roping, freeze tag, we’re grown women playing simple games but it’s fun, gets you up and moving and warmed up before you go running. The socialization is really a big part of it – we’re very supportive of one another.”

Annette Grape, 60, of Greece said 261 Fearless has an approachable camaraderie that she sensed right away.

“It’s a common thing with running, period,” she explained. “You talk when you run. You talk about your day, where you want to go on vacation, about everything that’s hurting you today, you talk about motivation or lack thereof — anything you’re thinking about — any topic. About your childhood. Nothing’s off limits.”

A professor in the master’s degree of social work program at the College of Brockport, Grape offered a thought about the togetherness of 261 Fearless.

“You sort of have this common goal — we warm up for 30 minutes then we run for 30 minutes. It’s kind of keeping ourselves motivated, giving each other tips on staying active, staying healthy, the gear we wear,” she said.

“It’s not often you have a women’s-only group. It’s something nice to just be women supporting other women. We get a lot of messages about what we’re supposed to be or whatever from outside. But this is uplifting. Dragging myself out of bed on a Sunday morning to be here at 8 a.m. when I have a half-hour drive, yeah. It is uplifting,” she added.

McCarten, who is a research coordinator at the Department of Veterans’ Affairs, said she was a little hesitant at first when someone asked her to join.

“I was a little worried there would be pressure on you to run so many miles, or your time or pace — but it’s not — we do go running but if you want to walk that week, or you’re not up to running, there are people who walk — you do this at your own pace,” she said. “It’s a no-pressure situation. It’s just a fun evening where you are doing some exercising. What a positive experience it is. I feel good about it.”

261 Fearless just becomes a really safe space for women for an hour a week to just let everything go, let home go, let work go, let kids go, and to meet other women and form friendships.

Fox said although the club will accept women 18 years old, the sweet spot is those who have hit their mid-50s.

“These are people who are typically empty nesters,” she explained. “And who are at a time in their lives when work is winding down, especially for woman, it’s a time when they can focus on themselves.”

As an example, she points to the directions a flight attendant gives passengers before take-off: If the air bags drop from the ceiling, put yours on first before trying to help others.

“We need women to put on the oxygen mask and take care of themselves.

This can be a scary prospect, starting out and it’s very interesting to see that when they first come to one of our meetings, they kind of hang back and kind of measure and size it up before they will jump right in. It takes some of them out of their comfort zone. I tell my kids in school — if you’re uncomfortable, you have to power through to learn something new. It’s going to be hard at first, but once you get over the hill, you’ve done it — great! Keep going,” she said.

“I want women my age to know that there is more for you — you don’t have to have a sedentary life. Your age shouldn’t dictate your activity level. There is a place for them with us. Even if you are walking, you are welcome here,” she added. ❖

Featured image: Members of 261 Fearless Club GNY-Rochester met April 6 at the Pittsford Community Center for a new round of run. About a dozen women meet every Wednesday. “What we do is promote socialization and empowerment of women through running,” says Lori Fox, 63, the club’s coach (dark hair, center). Photo by Chuck Wainwright

Why Is It Called the 261 Fearless Club?

In 1967, Kathrine Switzer, a 19-year-old journalism student, ran the Boston Marathon. She was the first female to do that in an event that was up to that point male-only. She finished despite the effort race official Jock Semple made to tear off her numbers bib.

Semple, you see, didn’t want any darn women in his marathon. Nobody in his circle felt that a woman could finish the marathon and they certainly didn’t belong on the course.

When Semple realized what Switzer was doing, he made a run at her. But Switzer was running with three men, one of whom was a football All-American. Semple’s attempt failed due to a cross-body block from Switzer’s boyfriend.

She finished the race and photos of Semple’s attack on her were everywhere.

In that one moment, the sport of running blasted open for women. Switzer received mail from women who wrote “261” on their bodies when they ran — Switzer’s Boston Marathon bib number. She would go on to win the New York Marathon in 1974 and create an international running circuit, and succeed in getting women’s marathon registered as an event for the 1984 Olympics.

261 Fearless was launched in 2015 and is a worldwide phenomenon. Switzer and club CEO Edith Zuschmann have visited Rochester and spoken to club members.

The first two sessions you attend are free. If you join, there’s a $26.10 yearly fee.