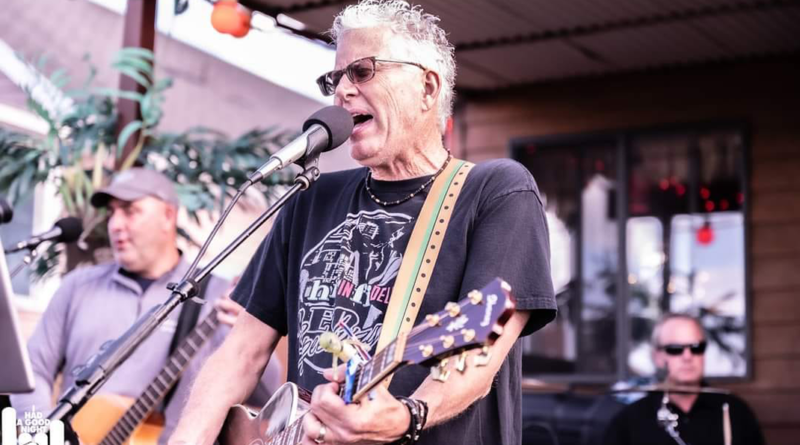 Chef by day, musician by night savors the flavors of two creative worlds

Great food and beautiful music have a lot in common: the best of both are made with passion, artistry, creativity and good taste.

Maybe that’s why Chef Mike Speranza dives headlong into each — culinary arts by day and music performance by night.

The 60-year-old Victor resident teaches industry experts across the nation how to prepare, plate and serve food that’s a perfect fit for their venue. During off hours he appears in restaurants, pubs and in concert venues throughout the Finger Lakes, either solo or with Shades of Grey, his five-piece classic and new rock band.

Which is his greater passion? He’d be hard pressed to choose.

Speranza’s culinary journey began at his grandmother’s knee every Sunday when the whole family gathered to make gnocchi. 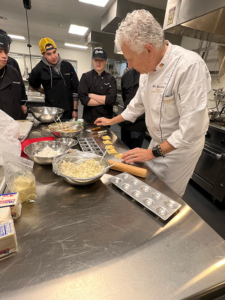 At age 16, a job at a small family restaurant in Webster bumped Speranza’s culinary passion to the next level.

“It was just by chance that I got the job, but I happened to be good at it and I really liked it,” he said. “Every person in this restaurant was a little bit crazy, and I liked that, too.”

As time went on, Speranza realized that kind of “crazy” was in the DNA of many in the restaurant business. It was the same quality he recognized in himself.

“We all share a common bond,” he said. “We all know what a great — and terrible —place it can be.”

Speranza’s career eventually led him to The Strathallan Hotel & Spa in Rochester, where Chef Greg Broman taught him “absolutely everything about food and life,” he said.

“I adored him and some 40 years later, not a day goes by that I don’t think about Greg and what he taught me,” said Speranza. “He was a mentor and an inspiration who showed me what I wanted to be and what I didn’t want to be.”

“I knew I had to work in his restaurant and turned down a lot of money as an executive banquet chef in Boston in order to work side by side with him as a line cook,” said Speranza 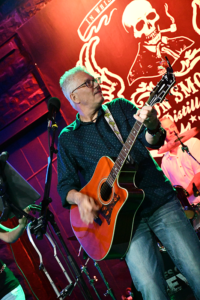 . “It was such a learning experience. And that’s one of my favorite parts of culinary arts — you’re constantly learning.”

Speranza’s take on fine dining was front and center at The Lodge at Woodcliff in Victor where he served as executive chef for six years.

And in 2010, Speranza was invited to serve in Michelle Obama’s Chefs Move to Schools presidential program and worked closely with school principals, staff, parents and students in Victor to inspire them to learn more about and experiment with food. He called his visit to the White House “truly the most exciting day of my career.”

He’s cooking, demonstrating, recipe and menu writing, showing ways to prepare, plate and serve the food and how it fits in the profile and style of the restaurant, he said. All with an eye toward food waste, sustainability, staffing and table service.

“I’ve been in this job for 18 years and it’s different every single day,” said Speranza. “I can do the same training with the same products yet it’s never the same. I love the creativity and constant learning. I hate traveling and dealing with airlines and hotels, but I love being a chef. I’ve always loved being a chef.” 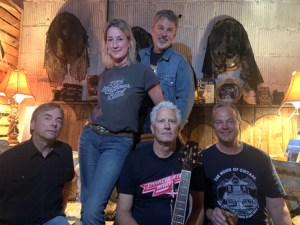 Much like his passion for food, Speranza’s love for music was launched early on, at age 5.

“My mom and aunt went to take guitar lessons and brought me with them,” he said. “Someone must have given me a guitar just to keep me busy and I sat in the back of the room playing what the instructor told my mom and aunt to play. That was the start.”

Of course there were music lessons later on, but Speranza hated every minute of practicing.

“When you’re not good, you don’t want to practice,” he said. “But you have to practice to get good.”

The young guitarist learned enough to play in a band in high school, all the while daydreaming about becoming a rock star.

Fast forward to 2014 and for the first time in his career, Speranza’s job did not require him to work late nights and weekends. That’s when he started playing more regularly, got back into shape and upped his musical game.

Eventually he joined forces with a few local musician friends and started his own group, Shades of Grey.

“It’s a five-piece band,” said Speranza, who also gigs solo and as a duo or trio. “I play guitar and vocals with Charlie Trahan on guitar, Karen Flack on fiddle, Dan Eberth on bass and Dave Williams on drums.

“We’re all very fortunate that we have day jobs and can play for the love of music,” he said. “It’s not about the money. That’s never a deciding factor.”

“Everything we want to play,” said Speranza. “Classic and newer rock, country (but only the cool stuff) and some originals.” 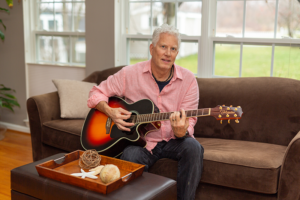 The band covers classics from REO Speedwagon, Journey and The Rolling Stones; contemporary hits from artists like Ed Sheeran and Jason Mraz; and Americana greats like Roger Cline, Johnny Cash, Neil Young, and even the Partridge Family.

Over the years, Speranza has amassed a collection of 14 guitars created by Gretsch, Ibanez, Schecter and Takamine. But his go-to instruments are 6- and 12-string Takamines strung with 11 gauge elixirs, which never fail to deliver that signature rich, vibrant tone and full range. A TC Helicon vocal harmonizer pedal rounds out his kit.

It’s true — Speranza can’t begin to imagine his life without music and calls it “a total stress relief.”

“Music is my basket weaving,” he said. “If I’ve had a terrible week at work, if I’m stressed out, if I have the worst headache, I start playing and it all goes away. Sometimes I even forget there are people in the room, forget where I am and get lost in the music. It’s so much fun.”

“The whole band was on the stage at CMAC, playing through real sound equipment, with professional sound technicians and stage crew,” said Speranza. “We were standing on the same stage that Kenny Chesney and Ken Cronin had stood on.”

Food and music have so many similarities, Speranza said. The instant gratification, the immediate response, the creativity and individual risk are all the same. 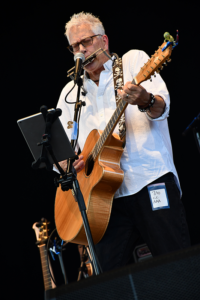 “It gives me something to look forward to. It takes me away from the real world,” he said. “And it’s personal — it’s only me. I’m putting myself out there. If I cook you a meal, it’s only me. If you don’t like it, there’s no one else to blame.”

As a highly productive, constantly on the run chef, Speranza’s got three words for those whose lifelong passion may have been sidelined for a time: “make it happen.”

“We all have responsibilities to pay the bills and care for our families,” he said. “But if you have a desire or interest in music or cooking or gardening or restoring an old car, you need to make that happen.”

It’s essential to take some time for yourself, even if it seems like business won’t allow for it.

“If it’s one night a month — you just have to do it,” he said. “Take guitar lessons, paint or draw in your garage or basement, do something for your own wellbeing. You can’t forget about the people around you, but they’ll understand and you’ll be a better person for it. You’ll be better able to take care of your loved ones, your friends, your kids if you’re mentally able to do so.”

Hear ‘Shades of Grey’ Live at These Venues